The 2-1 scoreline doesn’t quite tell the full story from the match as we better dominated and we showed plenty of improvement in our play after the Spurs showing. Our problem was we couldn’t take our far greater chances, and Bournemouth had a 2-0 goal lead inside of the opening 12 minutues.

Improvements yes, but again, more learning curves to be made and some players still aren’t up to speed or haven’t quite found their best form yet.

At least compared to the game I watched, statistics website Whoscored even managed to surprise me with their player ratings this time out. 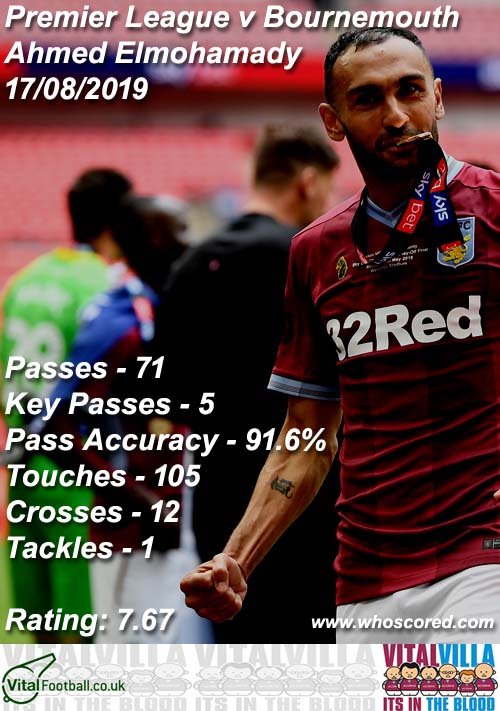 Ahmed Elmohamady picking up a star man score of 7.67 is bizarre. He was decent in attack again, as his stats show with five key passes and a massive 105 touches (the most of any player) but the crossing quality wasn’t great for me, and defensively he was again off the pace.

Despite his poor start and mistake for their goal, Douglas Luiz on 6.86 seems bizarre given how he grew into the match and ended the game, as I’d have thought Man of the Match would be between him, Mings and McGinn.

Then again, Anwar El Ghazi was rated higher than Trezeguet and given overall contribution I’m really not sure how that is possible either.

Must be one of those weeks and I certainly wouldn’t be surprised if these ratings change as the weekend progresses.