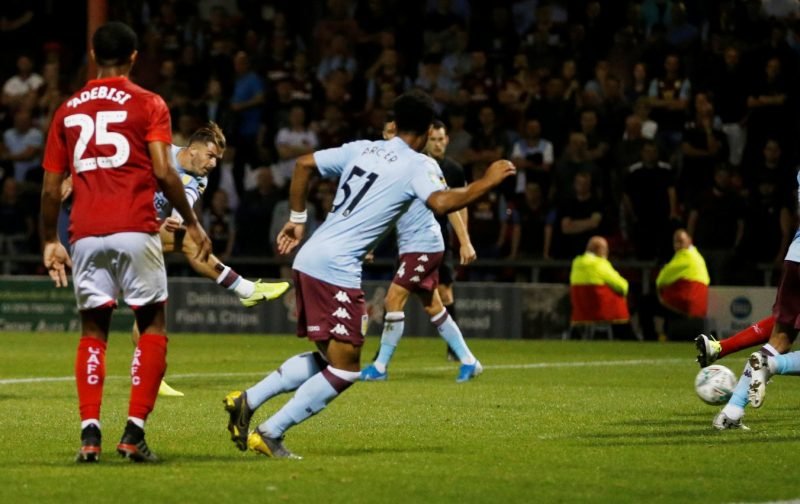 A standout moment which was perhaps lost in the avalanche of goals in Tuesday night’s Carabao Cup win at Crewe was the first team debut of promising academy player Cameron Archer, who came on to replace fellow graduate Keinan Davis for the last eight minutes.

Despite only having a short time on the pitch, 18-year-old Archer wasted no time in getting involved and played a part in the build-up to Jack Grealish’s goal.

With Wesley rested, Jonathan Kodjia out injured and Scott Hogan and Rushian Hepburn-Murphy out on loan, Archer was called up for the Crewe tie as back-up for Keinan Davis. Fans on Twitter were overwhelmingly positive about the youngster, who joined from Walsall at under-9 age and has been with us ever since.

Great result tonight for the boys. Well done @Cameronarcher_ very lively when you came on and played a part in Jack's goal! UTV! #AVFC

Super proud of my brother tonight, but Happiness on my dads face say it all i couldnt be prouder to call him my dad,
The time & miles his put in for me @jordannarcherr @TobiasArcherrr & @Cameronarcher_ since we was 6-7 for this moment alone looks well worth it ????#nosundaysoff pic.twitter.com/WP7dx3O0gR

1-6 (Grealish) #avfc Well done to young Cameron Archer for pressing the defence and winning the ball back to start off the move. He'll be chuffed to bits with that on his debut.

@Cameronarcher_ congratulations on your debut for @AVFCOfficial tonight, talent always shines through ⚽️???? ????Keep up the hard work ????????⭐️????

Very tidy debut from Cameron Archer. Good little cameo from someone not long out of the U18’s #avfc

With a long season ahead, it’s great to see the young talent being given the opportunity to shine, especially in an area of the pitch where we are unquestionably light on numbers. I’m looking forward to seeing how young Cameron progresses this season and let’s hope his display on Tuesday has given Dean Smith some food for thought going forward, in every sense.

Previous Article by JPA – Villa Park under the lights – is there a finer sight in football?