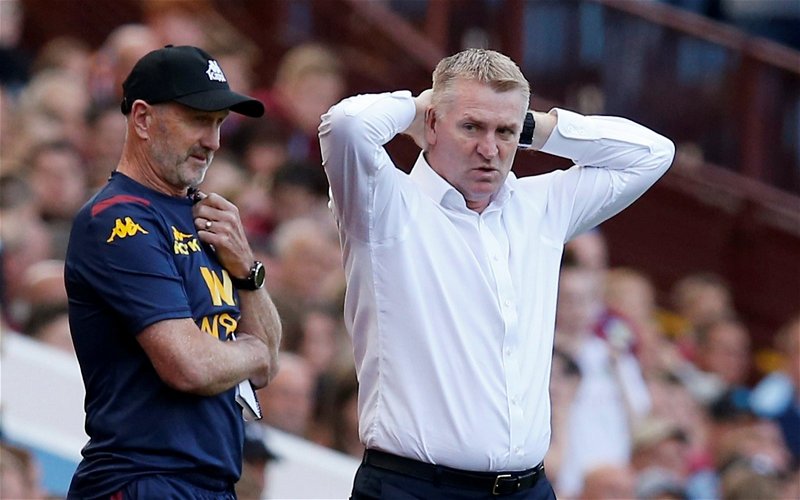 There’s no denying that with four wins out of five in the Premier League, it’s been a very good start to 2020/21 life for Aston Villa – but equally, you cannot dismiss how disappointing our second half showing against Leeds United was last Friday evening.

Conversation and debate on the Vital Villa Dean Smith Forum Thread following the Leeds defeat has understandably been lively. Some instant reactions and disappointments have slowly mellowed as the weekend passed and yes, some old camps naturally surfaced after the frustrations of last season.

In any event, the criticisms raised (given some thought I’d gone over the top) have to be put into context of that second half in isolation, it’s not criticism on the season as a whole and it’s not a prediction of where we’ll be in a few months time – but should always be looking to improve – whether player or coach – and clearly with how our heads went for no reason in reality, there’s an obvious improvement to be made.

Cherry-picking a few posts from the forum, I’d be amazed if the vast majority of fans didn’t agree with both the praise and criticism after the last game as the benefits of hindsight loom large for everyone, whatever side of the fence they sit.

What I don’t get is that we’re sitting in a far better position in the table than any of us could have dreamed of yet apparently we have major problems with manager and players.

You can only judge either after a run of matches. On the current run of 9 PL matches the balance is hugely in favour of both.

I was one of those reckoning the club needed to replace DS by Poch if possible. At the moment it looks like I was wrong and the club was right. We can only judge a season at the end of the season, but there is a positivity about the club which has been missing for a long long time. Leeds is only a very minor blip in the state of things.

After reading McParland’s post above, an interesting question to ponder….he suggests the club was right not to sack Dean Smith either during or at the end of last season. So how does everyone else answer that question? Should we have sacked him last season as a few were demanding or even at the end of it? Personally, I’ve never called for his head even though I felt he was starting to struggle between Christmas to lockdown in particular. I’m sure he’s aware of his faults, he often talks of the importance of players wanting to develop and to improve and I’m sure he doesn’t have a different mantra for himself and the coaches around him.

If you analyse what he’s done in just 2 years, could he realistically have done much better?

Personally, I think he’s done a terrific job thus far, he’s not faultless by any stretch and those weaknesses have sometimes been exposed but reading through the thread over the past week I do feel that some of the criticism has been a bit harsh in view of the start we’ve had and in view of the overall job he’s done in just 24 months. It’s almost as if those who were so anti-Smith last February and, in some cases before that, will pounce on any setback to roll out the ‘Smith isn’t good enough for us’ argument.

The first setback came against Leeds and the claws were out despite the best start for many a year.

And before anyone criticises that last sentence, I’m not suggesting he shouldn’t be criticised but it’s back to the question of balance in an argument which I often harp on about. Yes, he has weaknesses as a coach but he’s also got many decent qualities which seem to get overlooked by some who clearly don’t think he’s good enough. If we look back to February he was getting absolute slaughtered, some of it deserved, we were struggling big time but some of it was way over the top and again not reflective of the job he’d done as a whole.

So back to my original question and more intriguing I suppose now we’ve had the transfer window and a decent start…..Eight months on from the depths of despair as we trudged off the pitch against Leicester….Should we have sacked Dean Smith and replaced him? It’s a most definite ‘no‘ from me.

It’s a difficult one to answer without using hindsight which distorts the truth somewhat.

I’ll be perfectly honest with you. He should have been sacked in March right before lockdown – he was awful and getting worse, not better. However, after the restart he had earned the right to continue and the break gave him chance to adjust things the way many wanted him to, much earlier.

I’m very happy with the start to this season, the results have certainly come our way. Some performances look more coherent which is mainly what I look for and bang on about with respect to coaching ability.

I just want him to continue to improve and for Villa to be successful.

When that improvement stops/plateaus then it’s time to move on for both parties (for clarity I think there’s a way to go before we reach this point).

In the finality, I am an Aston Villa FC fan, not a Dean Smith fan, so my only loyalty is to the club and not to players, staff, coaches, owners etc who are a means to an end.

Im happy with Dean at present, he seems to have addressed some of the chronic issues that meant most of last season was a shambles. How far he can take us I don’t know but it will be interesting to see how much potential he has and whether he will make the most of it.

There were plenty of other comments I could’ve picked to demonstrate the point. Leeds was more painful because of the wave we were all riding on and the fact it could’ve been a historic five out of five – instances within the game only magnified that, especially as first half we just needed an extra gear and a touch more composure to make the most of our better chances at that point.

But Leeds has to be taken in isolation and in no way blemish the improvements we have made since the ‘big restart’ or whatever naff PR name it was given. The thing is, we need to go out and prove that against Southampton, show it was a blip.

In some ways the result is largely academic, it’s the performance that matters and not letting our heads drop the next time we fall behind and the players feel slightly hard done by.

It certainly doesn’t mean anyone’s head is being called for, even if some seem to have taken it that way.