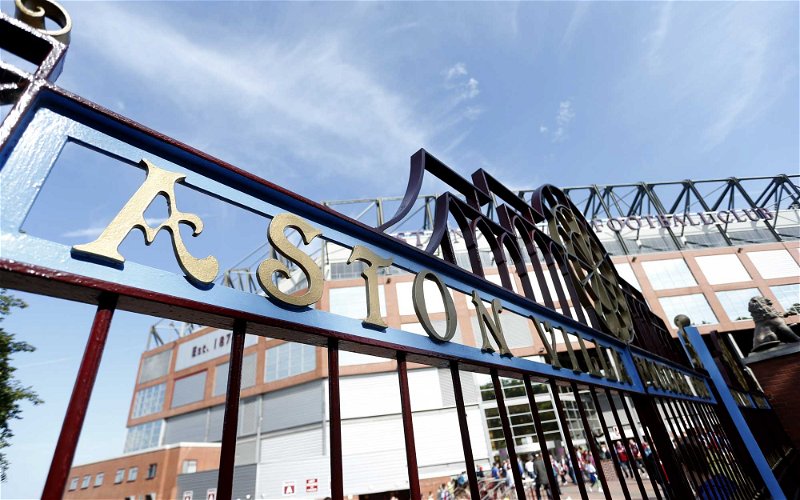 Part two here: Fear Conquers All – Part 2. VFC Formed And My 1st Radio Interview Whilst Being Distracted By Young Couples Copping Off

Part three here: Fear Conquers All – Part 3. The Time We Looked At Options To Buy Aston Villa & An AGM Walkout

August 2006. The final Aston Villa Shareholders Association AGM was held at the Aston Hotel. Our hero, Dennis Mortimer, who had long-since been made Patron of the AVSA, also attended. We’d done the formal bit of the meeting, taken the required vote to accept the bid formally and dissolve AVSA and Dennis was talking.

PING!. My phone alerted me to a text. Usually, I’d have my phone on silent, but I knew something might be coming that everyone would want to hear.

I read the text.

How rude! Sir Dennis is talking and I’ve got something more important to do? Then? Well. Sacrilege: I interrupted Dennis. Some of the members were looking at me as if I was a total ‘member’ for being so rude, but I assured everyone they would want to hear what I’d just been sent.

It was from one of the advisers for the takeover, David Bick, who had promised (if he could) to give me the news we’d waited years to hear.

No word of a lie, there were grown men with tears in their eyes that evening. Many asked me to send them the text and most, including myself, kept it on our phones for a long, long time.

A few of us bought a bottle of bubbly and went to the Holte End to toast the end of the Doug Ellis era. I know it all sounds a bit dramatic (and to be fair, history doesn’t really reflect well on the buyer either), but it was a major event for us at the time.

So that was that. I let out a huge sigh of relief. The protests were over. I remember being told by one of the advisers for the takeover how impressed Randy Lerner was that we disbanded VFC as soon as the bid was put in. Now it was done and I was determined to get out of the politics of the football and back to just enjoying being a fan. I was also able to prove a few wrong who thought I was in this for some sort of ‘look at me’ ego trip, or that I was angling for a job at Villa Park. It was done for neither of those reasons, it was done because I felt it to be right and I turned out to be relatively good at heading up protests. Who’d have thought!?

The Shareholders Association was disbanded. Some of the members wanted me to turn it into the Aston Villa Supporters Association, but I said that I was standing down as Chairman and that obviously if they wanted to do that, I’d be more than happy to help them with the handover. I’d had enough of running such things and having been so very vocal, I thought it was time to be slightly more low-key. It turns out ‘low-key’ really wasn’t my style.

It felt like a fitting and natural end to the organisation that Buck had worked so hard to build and run over the years. It would have been awful to turn it into something else, especially as Villa had Lions Clubs for supporter groups and things were changing in football – more money was pouring in, managers would no longer attend AGMs for associations like this and I couldn’t see what use we could serve.

Naz and myself were asked to attend a late-night curry in Birmingham with two of the British advisers, the night before the takeover was announced to the press and stock market. It was all very ‘cloak and dagger’ and we ended up meeting at about 11pm in a curry house on Broad Street. They showed us a few of the documents and told us about the big plans Randy Lerner had for the club.

Oh and I got the world exclusive! I’m not one for scoops, press-wise. It doesn’t really worry me if I’m first to a story, just that what I publish is factually right and good. But on this one, I wanted (and felt I’d earned) the world exclusive. No one else would ever know it was that. I didn’t bill it as such. I just knew the story was coming out at 7am the next day and I got up and published it at 6.59am

It was a huge relief to have got through that, even more so because I knew we were running out of steam. We couldn’t keep saying, ‘Doug out!’ if no one was coming forward and the thoughts of setting up the vehicle to do it ourselves was pretty daunting. £64million is a lot of money to raise!

The new group wanted to use me for some consulting. This was more like it. Campaigning to remove someone from an organisation, by its very nature, is negative, no matter how positively you try to approach it. This was positive stuff on how to re-build Villa. I just forgot one crucial thing – to charge for my time.

Honestly, from the time I sat outside Carl Chinn’s house and nearly drove home without going into the meeting, I never expected to be quite so at the front of all this, or so vocal. It was an interesting ride.

As the takeover gathered pace, I had several meetings at Villa Park with Randy Lerner’s advisers and people involved in trying to resurrect Aston Villa. As I’ve mentioned, this didn’t really turn out the way any of us would have hoped, but at this point we weren’t to know that.

I took some time off from my new day job (running a football network) and spent considerable time writing a document for the new owners called Villa Forward. It was 23-pages long and was introduced thus:

‘This document offers a brief outline of the contacts Villa Fans Combined and the Aston Villa Shareholders Association have built up over the years and includes ideas from fans as well as personal input on some of the possible ways to move Aston Villa forward*’.

*Forward seems to be appropriate because it is also the motto of the City of Birmingham.

It was well-received and I know a great deal of the document was implemented as two CEOs I met told me it was on their desk and things were being ticked off. I actually clarified with the first CEO under Randy, Richard FitzGerald (when he very kindly bought me a nice meal at Villa Park to discuss it), that it wasn’t a list of demands; it was a list of issues that had built up over the years, which they could decide whether to act upon or not.

I built up a relationship with those at the club over the years of their tenure. I wasn’t in constant contact with Randy Lerner obviously, but we did exchange a good few emails and I also spent a pleasant afternoon at the Cleveland Browns training ground with him, talking all things Villa. I’ll clarify for those who tend to be suspicious and think I took freebies from the club: this was at my expense. I was visiting friends in Cleveland and was able to arrange that to coincide with a training ground visit. Our last communication, as he was departing, was lamenting the passing of David Bowie. He also sent a director (his friend, General Charles Krulak) to England for various reasons, one of which was for him to meet me and to personally thank me for the help I’d tried to give them and ‘my’ club.

The General explained the reason why they had listened to me over the years was that I’d give them the kick up the backside when they needed it, stuck up for them when it was just but also, I’d been professional and tried to be calm and measured in my communications. Many fans didn’t realise that GK was, for many years, a non-executive director (unpaid) and did far more than most non-exec directors would ever dream of doing for their respective companies. He took a bit too much stick from some fans than he deserved, in my opinion.

I also got to know a character called Paul Faulkner, who at the time was Randy’s right-hand man and for a time became CEO. He is much-maligned (I think) for doing a very difficult job at a time when Randy was becoming more and more disillusioned with the club and the difficulties of modern football. Randy had cared, but he got wrapped up in other things in his life and had less time to devote to Aston Villa, not to mention the recession which impacted greatly on the finances he had to put towards the club.

A long line of poor managerial appointments really ended up marring his tenure, but he did do a great deal to re-build the infrastructure; it’s just a shame the ‘product’ on the pitch deteriorated alarmingly. From constantly challenging the top six of the Premier League, to becoming also-rans and eventually being relegated (having been ever-presents in the Premier League), this was a very bitter pill for proud Villa fans to swallow.

I could now go totally into the history of the managers and why they were wrong, but it would become an entire book in itself.

That was the end of the Lerner tenure, as we were then taken over by a Chinese businessman, called Doctor Tony Xia.

More on this tomorrow…..