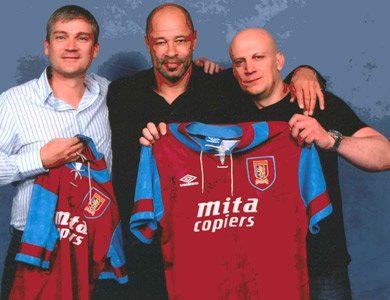 So God has finally intervened with regards to the terrible situation that our beloved Aston Villa finds itself in.

Someone the other day, on Twitter, questioned the existence of God, I answered: “of course he exists, I’ve seen him play!”

So, Paul McGrath, today tweeted demanding some communication from our currently silent club as to the mess they’ve seemingly got themselves into.

To All Aston Villa supporters, while people are worried what the future holds for their beloved club , things need to be done, in a way that us fans are told what's happening! #SimpleAs #Respect #AVFC

As you can see, he calls for ‘respect’ and says it really is ‘simple as’…. communicate.

But I only want communication when they have something to communicate, not Xia’s ridiculous tweets. In fact, personally, the only communication I’d like to see now from the owner is, similar to what Randy did, ‘I tried, I failed, I’m handing this club on’.

It is a disgrace the mess we are in. I’m shocked that there are so many fans still sticking up for him in fact. Do they not realise he gambled, he lost and now a lot of good, honest, hard working and normal staff are in fear of their jobs and further redundancies, as well as sales of some key players to try to get halfway out of this mess, will ensue?

All round good guy, DJ and Villa fan Declan Pierce http://www.declanpierce.com/ , who is one of the blessed, because he knows Paul personally tweeted in response:

A Villa mad Rev agrees with Paul McGrath, as do others….

Spot on mate, the silence is very worrying.

That seems to be same problem with most clubs Paul, not keeping fans up to date about their clubs, ,,
Do they realise if it wasn’t for the fans there would be no club!! Totally agree with you my man ????????

Exactly God! It’s about time @Dr_TonyXia showed us some respect whilst he destroys our club! Let’s hope he finds a buyer and we can sit in a safer pair of hands ASAP! #AVFC

And I agree with this, far too many fans were hoodwinked, and those who dared question the goings on got quickly shouted down! Seemed to me, because he did a few tweets, he was ok. Hmmm.

We will not be told anything Paul, the vast majority of fans thought the club was being run sensibly…#avfc existence and future was gambled with by @Dr_TonyXia and he kept all that to himself..
The Dr will not give us the truth now it will be silent running..#utv

We can but hope this week brings some clarity, some communication and more than anything, a clear vision of what we are going to do in the short term. The staff, including some of the board members, deserve to know if they have jobs for a start.  Then there is the question of how on earth are we meant to prepare for the new season?

Good grief I hope there is yet another saviour out there willing to come in and sort this mess out, this time properly and with honesty. None of the ‘top of Europe in five years nonsense’ thank you very much.

Join in the discussion in 100% Villa and in the comments below. Or don’t. Your choice really!