With plenty of talk this week about the future of highly rated Aston Villa Academy graduate Callum O’Hare given he’s yet to pen a new deal and will find himself as a free agent at the inevitable end of the 2019/20 campaign, there are a couple of others who could move on – one of which being striker Keinan Davis.

The 22-year-old youngster boasts 21 starting appearances to his name at Villa, with 36 additional showings from the bench – but despite some very impressive target man performances and some lively displays, he has only chipped in with four goals.

Should Davis Get A New Deal? 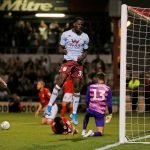 The goal return has long been an issue for fans, as is his injury record as that has seriously hampered his development so far, but speaking to Football Insider this week, former right back Alan Hutton has said he’s desperate to see the club tie the lad down to a new contract as he’s convinced he’s going to have a big future ahead of him.

“There’s other boys, like Keinan Davis, I think he’s out of contract. He’s one I would be desperate to tie down even though he’s had his injury problems this season. I think he’s got everything to be a top centre-forward.”

I imagine a number of fans will be mixed when it comes to his thoughts here, we’ve seen what Davis can do leading the line, but it just hasn’t been fit enough to do it often enough – then there’s the lack of goals.

I can see a final 12 month deal being done to see if he’s over the injury problems and can get himself going, but in the modern game, he is sadly running out of time now.