Charlie Adam and John McGinn have many similarities. They are Scottish, have represented their country and possess a left foot that can act as a tin opener.

Both midfielders left the SPL on modest fees of £500,000 and £2.75 million and played crucial roles in taking their respective teams Blackpool (2010) and Aston Villa (2019) into the Premier League. This included scoring in the Championship play-off finals against Cardiff and Derby.

In 2011, Dundee-born Adam was named on the PFA Players’ Player of the Year Awards alongside Gareth Bale, Nemanja Vidic and Carlos Tevez. After leaving The Seasiders he moved to Liverpool for close to £7 million before going on to spend six seasons at Stoke, where one particular highlight was a 65-yard wonder goal against Chelsea in 2015.

McGinn’s path within English football is travelling in similar parallels. In his first season at Villa Park, he was voted both Fans’ and Players’ Player of the Year. His first goal for his new club, a 25-yard spectacular volley against Sheffield Wednesday [in front of the Holte End], was the Championship’s Goal of the Season.

Could he replicate this fine form into the Premier League?

It’s early days but the answer appears to be a yes.

He has scored three goals to date and was nominated Player of the Month for September. Two of his goals came away to Spurs and Arsenal, where he outshone club record transfer buys such as Tanguy Ndombele (£65 million) and Nicolas Pepe (£72 million).

If he maintains his consistency, the former St Mirren and Hibernian player, has every chance of being voted by his peers for an award at the end of the season.

So, who better to ask about the impact McGinn has made than his fellow countryman Charlie Adam?

He said: “I have to admit I’m surprised at how John has performed and that’s because I didn’t see much of him playing in Scotland. He has made the transition look easy. His style of play is appreciated by the fans. He never stops running as he is a box-to-box player.”

There are some Villa fans concerned the 24-year-old, who signed a new five-year contract in August, could be tempted to follow the likes of James Milner, Fabian Delph and Stewart Downing to pastures new.

Some media reports indicate that Sir Alex Ferguson is encouraging Ole Gunnar Solskjaer to bid for the player at a cost of £50 million.

Adam continues: “He’s the heartbeat of the Villa team. Him and Jack [Grealish] have formed a good partnership and this will be very important if they are to stay in the Premier League. He has everything he needs at Villa. They have a good [managerial] set up, excellent training facilities and the fans have taken to him. Everything he needs to improve he already has. John can’t help speculation or what the press writes. If someone does come in and makes a bid then that’s testament to his performances. All he can control is going out every week and playing to the best of his ability.”

Are You Worried We'll Lose McGinn Next Summer? 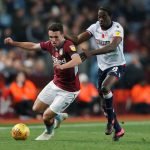