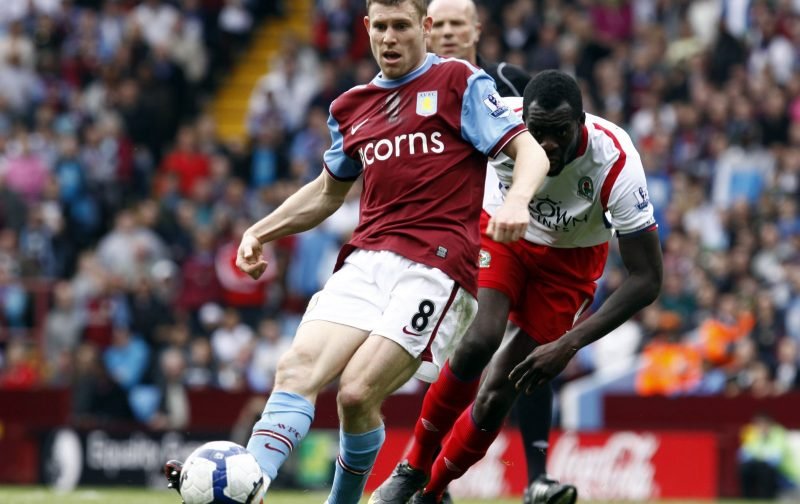 I had this submission from journalism student Kieran Horn who took some information from us Villa fans in the James Milner Thread. I’m only too happy to publish because, for me, Milner was the last player I cared about leaving. The blow of losing Gareth Barry was compounded when Milner left. I’m chuffed he went from strength to strength, but when you think of who we lost over those years, it brings a tear to your eye really doesn’t it?

The article by Kieran:

In one of the biggest games of the 2018/19 Premier League season so far, Arsenal were taking on Liverpool at the Emirates. With the game still goalless and heading towards the hour mark a loose ball fell perfectly for Liverpools stand-in skipper James Milner who calmly swept the ball home to claim his 50th club career goal. Despite hardly being known for his scoring ability, 50 goals in professional football is still an impressive accomplishment but there are many other stats, figures and videos that show exactly why James Milner has become one of the best central midfielders in world football.

The Leeds born footballer has had an extremely successful 16-year senior career and is still going strong at current club Liverpool. Milner began his career with boy hood club Leeds United where he spent 6 years with the academy and the following 2 years, which also included a 1-month loan spell with Swindon Town, as a part of the senior team.

Even during his first spell with Newcastle United when the midfield man was only 18, he showed excellent skill and was very humble over the opportunities he was receiving. Milner spent the best part of 6 seasons switching between Premier League clubs Aston Villa and Newcastle, where he was able to shine in a variety of different positions.

In the early stages of his career James was predominantly a winger. However, after the sale of midfield maestro Gareth Barry, Villa were lacking a true leader in the centre of midfield, which led to Villa manager at the time Martin O’Neill turning to Milner to fill the role.

The 2009/10 season was a huge turning point for Milner in his career now with the opportunity to impress in his new position and he far from disappointed. James played a total of 4,359 minutes in all competitions, scoring 12 goals and claiming 16 assists in a brilliant season with Aston Villa.

Milner was incredibly popular among Villa fans, with Jonathan Fear of Vital Villa describing him as ‘A true professional, great engine, gave a damn about his performances and results’. After giving 3 seasons to the Midlands club, Milner was beginning to attract attention from other Premier League clubs most notably Manchester City.

With the move to Manchester 90% complete, Milner played his final game for Villa at the beginning of the 2010/11 season putting in a phenomenal performance against West Ham. One Villa fan was able to recall Milners Villa farewell stating that, ‘it would have been the easiest thing for him to not play for fear of injury or something, but not only did he play, he put in a fantastic display and scored a very good goal’.

During his time at City, Milner was able to win the Premier League twice, the League cup twice and the Community Shield. Milner scored some big goals, including the opening goal in the 2012/13 season at the Emirates where his side beat Arsenal 2-0. He also found the net in the Manchester Derby at Old Trafford helping City beat their bitter rivals 2-1.

With his contract expiring at the end of the 2014/15 season, Liverpool signed the midfielder on a free transfer, instantly naming him the vice-captain of the club. During those 3 years Milner helped inspire Liverpool’s run to both the Europa League final, losing to Sevilla and last season’s Champions League run losing the final again this time to Real Madrid.

At previous clubs, Milner had been able to show his versatility by playing in almost any position his manager needed him. This was extremely tested in his second season with the Merseyside club, as Milner played most of the season at left-back. The 2017/18 season sparked Milner’s consistent run in the centre of midfield where he continued to shine. Milner then provided 8 assists in the Champions League with performances over two legs against Man City and Roma being the highlight.

His most notable Liverpool display came in the opening game of this seasons Champions League group against one of the favourites to win the Champions League, Paris St-Germain. Milner put in a fantastic performance against the French champions, a combination of excellent energy and pinpoint passing helped inspire his side to a 3-2 win where the man himself found the back of the net from the penalty spot.

His footballing ability only makes him half the player he is. His desire to win, give 100% and his fantastic attitude makes James Milner a one of kind footballer. At 32 years old the workhorse midfielder seems to be getting better with age and is showing no signs of calling it a day. ‘Every team needs a James Milner’, an excellent quote which exactly shows what fans think of James Milner and how he has developed to become one of the best midfielders in the world.

With thanks to Kieran Horn