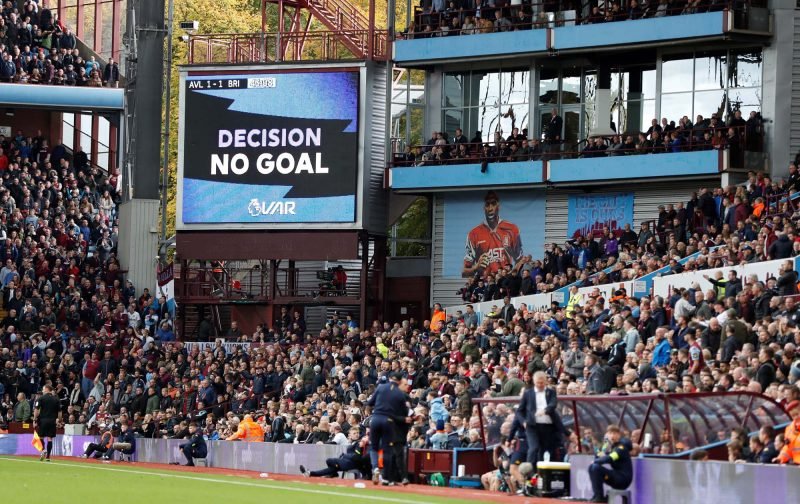 Few Aston Villa fans expected anything from Saturday’s trip to the Etihad Stadium to face Pep Guardiola’s Manchester City and in many ways, it was always going to be likely that the best we could hope for would be a point – so all eyes were on our overall performance and seeing further improvements in our organisation and style of play.

Largely, we probably got that but with Video Assistant Referee technology seriously screwing us so far in the campaign of 2019/20, that became the single talking point for most following the match.

Nobody can deny that second half, after our more impressive 45 minutes, City didn’t deserve the win – they took advantage initially of another defensive mistake, but in what became a 3-0 defeat, it’s the second goal that took the headlines.

VAR decided in its infinite lack of wisdom that the goal was scored by Kevin De Bruyne, therefore neither Raheem Sterling nor David Silva were offside. Fair’s fair, Silva wasn’t in that circumstance but in crossing Tom Heaton’s path, Sterling clearly interfered with play.

As Dean Smith intimated post-game, giving De Bruyne the goal got VAR out of jail in some ways, as Sterling surprisingly didn’t become part of the conversation as everyone focused on whether Silva got the touch, and had he, then they believed Sterling came into play – which is just flat out wrong based on the laws of the game unless I’m having a serious blonde moment.

As fans will be keenly aware, almost immediately after the final whistle, the dubious goals panel (or whatever they’ve been renamed to) confirmed what we all knew.

The Goal Accreditation Panel is an independent entity which has no affiliation with VAR#MCIAVL https://t.co/rccQnXtrCI

After all, it’s not like Silva claimed the touch and told the referee it was his goal instantly was it!?

The added caveat sentence from the Premier League wasn’t missed by anyone either. But still, Sterling was offside in both cases, and it took us a while to get our spirit back after the second, so it can easily be argued incompetence affected the game hugely, even if few would argue it would’ve changed the fact we would’ve lost the game, and City overall, deserved to win.

VAR was supposed to clear up clear and obvious errors, that’s what it was sold on and we aren’t the only side to now regularly see an incompetent and pointless referee show favouritism (whilst hidden near Heathrow) – dare I mention idiotic duo David Coote and Martin Atkinson and their almost identical re-run of Conor Hourihane’s goal against Brighton, when it comes to the Manchester United v Liverpool match.

What should clearly be an advantage to the game and the referee’s themselves, is being undermined based on how senior a muppet with a whistle is considered to be by his colleagues it seems – and it’s the same well known senior muppet’s who fail week in week out, whether they actually have to run around a pitch or not.

The game I grew up loving died a long time ago when it came to the money and primadonnas falling over like they’d been shot and that’s before I get onto the authorities who have barely kicked a ball in the lives, but if something isn’t done about VAR soon it could be the nail that the coffin can’t come back from.

This makes no sense lolllll, you’re basically admitting the fact City scored from an offside position.

Soooo what you’re saying is VAR made another error and Sterling actually was offside? Thanks.

Their second paragraph shows they knew they were wrong

That would mean Sterling was offside. What is the actual point of var? Officials are useless.

So that means VAR is useless lol, if silva touched the ball sterling is offside. If its a kdb goal sterling isn't offside. Would just love some clarity

Again… what a shambles VAR is!

Villa aren’t alone in the Premier League, and just like the penalty argument about decisions evening themselves out over a season – that certainly won’t be true – but at least we aren’t alone in football full stop at seeing VAR become the AI monster that loses control of itself.