Given Aston Villa head coach Dean Smith’s words earlier in the week, most fans probably assumed that Jack Grealish was back, fit and firing on the training pitches as we continue our buildup to the derby with Wolverhampton Wanderers this week – but sadly that’s not the case.

Meeting with the press earlier today to discuss Sunday afternoon’s clash at Molineux, Smith confirmed that Jack had still been experiencing pain in his calf after taking a knock, and the bleed was bigger than originally expected so he hadn’t yet returned to Bodymoor Heath’s pitches.

Speaking to Sky Sports Smith confirmed that his involvement in the game was rated at 50/50 at this moment in time and it would all hinge on how he felt on Saturday, and whether he made the training session then.

“I expected him to be training by now but unfortunately the bleed on his calf was a little bit bigger, and he still has a lot of pain. The masseurs and the physios are getting their fingers to work, and he has another 24 hours to be fit. He is certainly physically OK because he has been doing an awful lot of work in the swimming pool. He will be OK but he just needs to make sure he can get through a training session tomorrow. We are hopeful but it is 50-50 at the moment.” 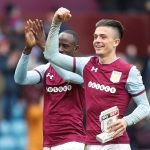 It certainly begs the question now as to whether even if he makes the training session, should we risk him making the issue worse and should we give him longer to ensure he’s at 100%. The squad certainly did themselves no harm against Liverpool with him watching on from the stands, but maybe bench at best for Sunday in light of this?