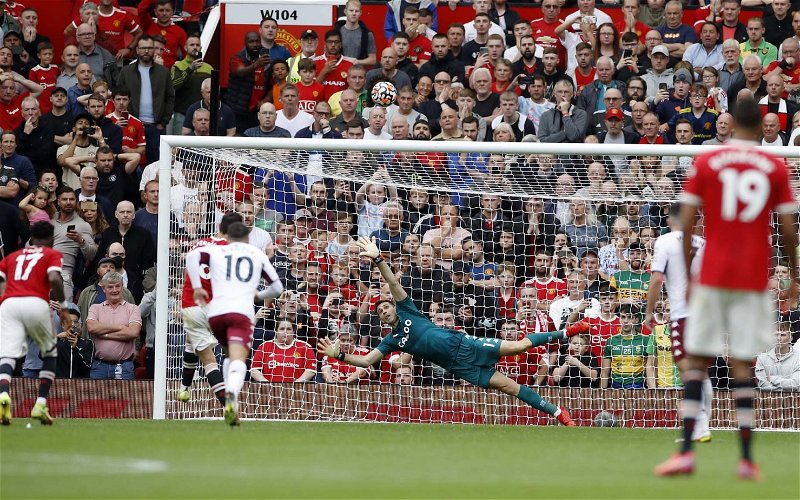 Saturday’s clash between Aston Villa and Manchester United at Old Trafford was certainly a tasty affair but few fans would’ve predicted how the 90 minutes would play out.

Head coach Dean Smith had us set up perfectly and we took the game to United once we’d settled, and we were easily the better team on the day and had it not been for wasteful finishing again, we’d have been clear long before we needed Kortney Hause to rifle a header in from a late corner.

Predictably shortly after we took the lead, Mike Dean gave United a ridiculous penalty to try and level things up, but this was where it got even better for our travelling faithful.

Emi Martínez had to be pushed away by Manchester United players as he stood in front of Bruno Fernandes telling Cristiano Ronaldo to take the penalty.

He then danced in front of the Stretford End after it flew over the bar. https://t.co/fblTvl9b0O pic.twitter.com/2kTWGI5Qvl

Much to Ole Gunnar Solskjaer’s annoyance, we did a Man United and surrounded the ref to protest, and Emi Martinez continued his ‘psycho between the sticks’ routine and called out Ronaldo to take the penalty. Ronaldo botted it and walked away, Bruno Fernandes bottled it and ‘placed’ the ball three miles over the crossbar.

I thought the little dance was a particularly nice touch.

Following his injury, Leon Bailey wasn’t there in person, but he was certainly there in spirit when Hause found the net.

With lots of love for Emi and the team on social media, Bailey secured plenty of his own with that clip – particularly the accent.