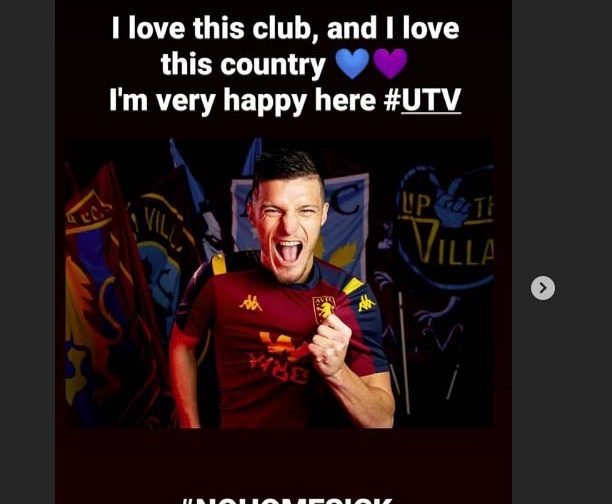 Not an entirely unexpected deadline day move from Aston Villa, but French full back Freddy Guilbert once again headed out of Bodymoor Heath with his destination being Ligue 1 side Strasbourg.

Villans will remember that the right back spent the second half of the 2020/21 campaign out with Strasbourg and he rejoins them now with the side sat in 13th place in their top flight.

Having found the net for us in our youthful round two EFL Cup triumph over Barrow (6-0) the other week, Guilbert hasn’t featured in the Premier League this term and for whatever reason, has long seemed out of favour under head coach Dean Smith.

The 26-year-old made the move yesterday evening and he’ll be with them for the remainder of the 2021/22 campaign, where he’ll undoubtedly be looking to add to his 13 appearances for them already.

Given he’s out of contract come the end of the 2022/23 campaign, whilst it hasn’t been confirmed it would be an educated guess to assume there is a buy clause of some kind in this deal. We do have options, but understandably some fans have questions.

But we shall have to wait and see on answers – good luck Freddy.

And four players capable of playing there. At least two of whom are probably higher in the pecking order there than Guilbert. This is good for everyone involved.

Any club in the country would be struggling with 3 of their 1st choice back 4 out at the same time BUT if we lose all 4 then it'll be Young-Hause-Axel-Lindley (the lad who came on at Barrow). Not ideal but we can't stockpile RBs again.

Yeah why an earth would we have an actual RB as back up when we can have some CBs and a LB/LW. If Guilbert has forced the move then fair enough and I wish him all the best, if Smith has forced him out I don't understand at all.

I wish we had kept Fred he has PL experience and can cover injuries as well as red card incidents. We seem to be injury prone in various positions already and we can’t expect Young to cover them all. I wish Fred good luck on his loan transfer. He is appreciated by lots of fans.

I really don't care about the hate in coming… but we have let / sold/ loaned out more playes than have come in …. im no account but im sure something isn't right !!!!! I though we was strengthing and looking for top 7 finish… might just be me… but where is the squad gone

Sigh. Sorry to see you go again, Fred but best of luck. Shame Smith doesnt even value you as a squad player but the way the squad & team looks, we might still get to see you in the final years of your contract.😉

You'll always get a clap from the Villa faithful!

Poor decision. Better RB than both the CB’s that can supposedly play RB. Will be missed if cash gets injured.
Good luck Fred.

Really don't agree with this. Always put a decent shift in. Excellent right back cover for Cash. Really disappointed