One Villa Deal Gets Closer As Club Confirm Expected Departure

With Aston Villa again going into the clash with Brighton and Hove Albion at the weekend without a recognised senior striker, head coach Dean Smith gave an update on our chase of Genk striker Mbwana Samatta.

Having been linked with Samatta over the summer, many fans wonder if this was the deal that fell down as we looked to bolster our attack and if that is the case, plenty of fans will wonder why it’s taken so long to get it back on track but with the deal almost over the line now, his work permit can’t be far behind.

Speaking to Sky Sports following the game, Smith claimed the deal was ‘very close’ and it was simply a matter of ticking off the ‘paperwork’.

“We’re getting very close. I think the paperwork is just being ticked off with Samatta. If we can get that done, we’ll be really pleased because he’s a good player and on top of that, he’s a really good character as well.”

With us knowing our stuff about work permits given our summer dealings, given the position we are in you’d hope we are confident of getting it over the line ahead of Tuesday’s clash with Watford, but at least we saw better from youngster Indiana Vassilev in the last one.

With Samatta having scored 43 goals in 98 league matches for the Belgian side, we definitely need him to hit the ground running but with players from abroad, that can never be guaranteed.

One thing we do know for sure is that Jonathan Kodjia’s long speculated departure from the club – amidst the usual transfer window illness – has now been confirmed by his new club.

At the time of typing Villa are yet to confirm the deal, but as you can see, Al Gharafa haven’t wasted any time.

Few will forget Jimmy Danger’s initial goal contribution (video clips here) when he arrived from Bristol City and whilst plenty were happy to wish him well on his departure (click the above Tweet), there will certainly be those who feel the relationship soured.

Whatever side of the fence you sit on there, I can’t be alone in thinking their logo looks like Grampa from the Simpsons…am I?

Have To Wish Him The Best 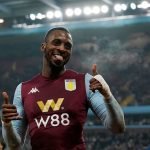 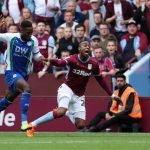