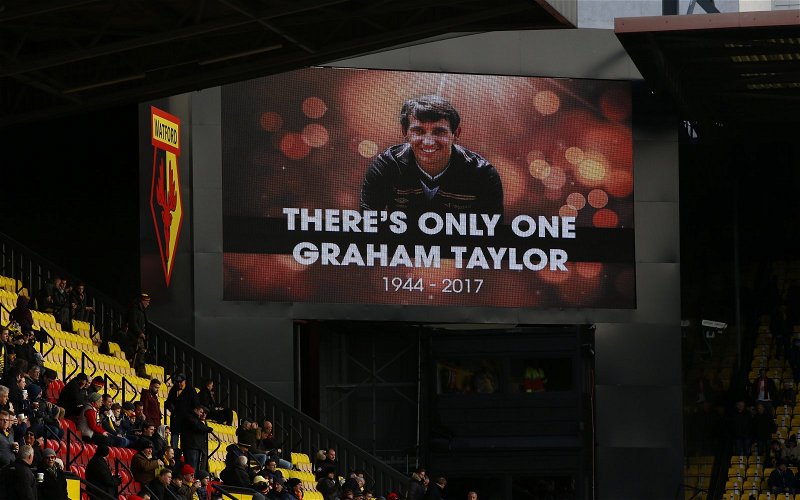 As Aston Villa eyes turned away from the pleasing, but frustrating, 2020/21 Premier League campaign with our solid eleventh place finish and improvement, thoughts turned to pre-season and plenty of fans wondered whether or not we’d again be honouring former manager Graham Taylor following our involvement in Watford’s inaugural ‘Taylor Trophy’ tribute game back in 2017.

As matters had it, there was no need to arrange a friendly to mark the occasion this year (I believe it was our turn again) as we meet them at Vicarage Road on the opening day of 2021/22 (August 14) and it’s long been known Taylor’s family would be in attendance – but what wasn’t known was how the event would pass off given the emergence of Covid, but it seems fans will be there without restriction – although common sense would undoubtedly be encouraged at this stage.

What has also now been confirmed by Watford fans is that they won’t be doing their normal opening day celebrations of flag waving and banner displays, but it will be the traditional ‘Taylor Trophy’ scarf display to honour the much loved, and missed, GT.

We will not be doing a surfer/banner display or wavey flags for the opening game of the season. Instead we would like every single watford fan (and @AVFCOfficial fan) to bring their scarves and hold them aloft in memory of our Much loved, and so sadly missed, G❤️T #watfordfc RT

I’ve no doubts the travelling faithful will do us all proud.

Liam Bryan is joined by Peter from The Holte Trinity Show to discuss how Aston Villa’s Owners are leading the club to Europe. The pair discuss the key to creating a positive culture where growth is accepted, analyse the key to Milwaukee Bucks’ success who are co-owned by Wes Edens and the importance of statistics and analytics when recruiting players