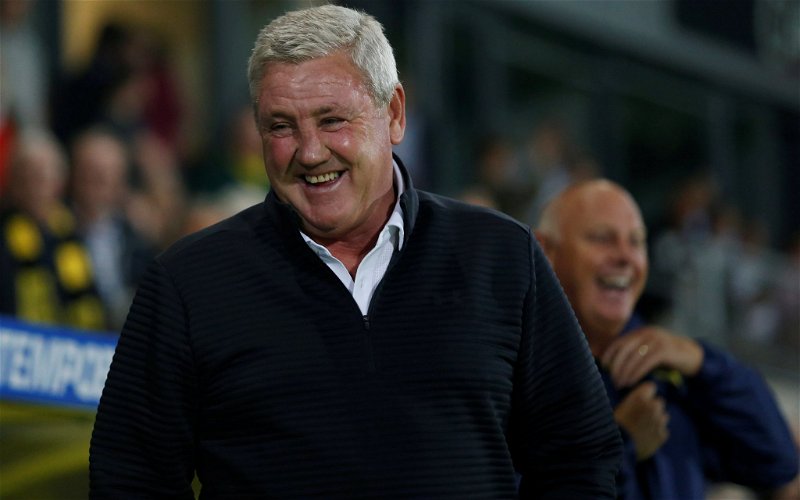 Although Aston Villa head coach Dean Smith was no doubt wrapped up in the emotions of leading his boyhood club into the Premier League at the first time of asking as we won promotion on Monday afternoon via the Championship Play-Off Final, our gaffer showed his class by making a reference to former manager Steve Bruce.

Quoted by the Birmingham Mail following the game as Smith gave his round of interviews to the media, he said.

“It’s unbelievable. I’d have never believed I’d be in this position now. I was loving my job at Brentford. Unfortunately someone has to lose their job for me to get this. But you know, Steve Bruce’s signings have scored – El Ghazi, John McGinn. He’s got to take every credit as well.”

I defy anyone to object or disagree with that.

It’s easy to just remember the final months of Bruce’s reign at the club and yes, it was hugely disappointing, our overload of wingers at the expense of centre-halves was laughable and our play had become largely awful. However, it shouldn’t be taken in isolation. He had his own health issues that fans weren’t aware of for quite a while, and there was also his personal loss following the death of both parents to factor into things.

And that’s before we even get to Dr Tony Xia’s gambling of the clubs’ future on promotion and the struggle to keep the lights on prior to our takeover. Few, if taking off their claret and blue specs, can blame him for some of the errors given the clear pressure he was under – but he plodded on trying to do what was best for us.

The departure was in our best interests and most certainly his, and he has got his spark back at Hillsborough now and enjoyed a good run of form in the second half of the year after he’d fully relaxed up and for all parties, it has proven to be for the best as most thought it would.

Regardless of how things ended, his role in turning the atmosphere at the club around, helping to reinstill a backbone and some pride should never be overlooked and it should never be forgotten. He may not have led us back as he wanted, but understandable hiccups aside, he played his part.

Whilst his memory his time with us might be tainted by the more vitriolic moments from the few, and it certainly seems that way sadly from some interviews, I’d like to think most of us have a more reflective outlook for our side when it comes to acknowledgement.

In short, I couldn’t agree with Smith more and we next face Brucie it should again be with warm memories for how he helped turn us around.