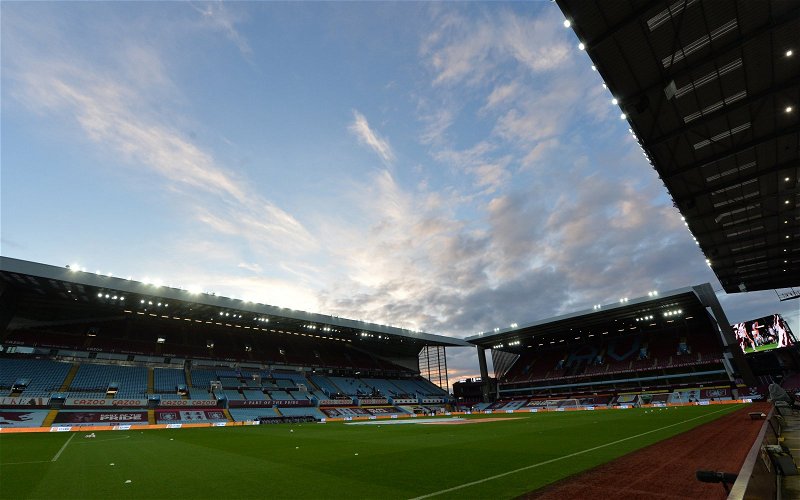 A stunning video and prose from Liam on twitter: @liambryan02, our Vital Villa podcast supremo.

Ever since my first Villa game, I’ve been told that you don’t choose Aston Villa, Aston Villa chooses you. The first time you sport claret and blue, walking through the streets of Aston with honour and dignity. Despite being a festivity, Villa Park was a place of peace and tranquillity where no matter if it’s light or dark the faithful make their mark through their blood, sweat and tears. Despite recent fears, throughout the years B6 has been the home of entertainment where games were a constant thrill but for over a year it has laid still, with no supporters in sight as the sound of silence has taken the limelight. For over a year, life has been tough and I’m sure the last thing you want to see is me recapping the last 12 months but hear me out. After days of doubt, months without our close family and friends as fans we have grown stronger, as a country for too long we have suffered the effects of this virus. As the world becomes desirous for times like the past, match days at Villa Park will become memories that will forever last.

Let me be honest with you since the first lockdown began I have felt empty, beyond the point of emptiness, full to the brim with fake confidence, with a guard that will never be broken, because I had broken a long time ago. A stone’s throw from anxiety taking over my brain, with fear at its utmost confronting me again. From the heights of the Holte to sitting on my own, I soon became alone restricted to the walls around me that were once called my home.

As for football, the sport which I so loved had taken a backseat as the season was postponed yet I was still depleted of any knowledge of the unknown. “Unknown”, meaning not known or not within the range of one’s knowledge and yet to acknowledge the obstacles ahead, instead of optimism, feelings of anxiety became widespread. From joy came sadness, as we learnt to adapt to the madness of our world whilst trapped in darkness. So alone I sat, filled with despair I cry, dear anxiety when they ask me what I am afraid of, I lie. Lie about my suffering, lie about my pain, these thoughts are concealed but the feeling is strong again. My mind tries to refrain my thoughts from being spoken aloud as this cloud of darkness comes to reign once more.

Nothing I could say could speak of its entirety, as I cry internally thinking I have lost my sanity. An outburst of profanity, an outburst of rage, yet despite the agony humanity turned a new page. Project Restart saw the return of the Premier League, a campaign that saw intrigue with no fans in the stadium, a setting that has never regularly been seen before. The roar from the Villa faithful would be absent once more as Dean Smith’s side would take to the floor to try to avoid relegation.

As a nation, our perspectives on life have changed and for me, my love for football has ranged from time to time as watching football from afar was never the same. The game we all loved was now a shadow of its past, as each 90-minute broadcast passed my love slowly diminished. Let me be honest with you I was finished yet I still kept coming back for more. You see I couldn’t ignore my care for Aston Villa since an early age, watching the boys in claret and blue perform on stage. From an early age from the whistle I engage, whether I’m delighted or outraged, whether we win or lose, I refuse to follow any other sport than football. McGinn’s volleys to Alan Hutton’s runs, the ability to enthral an audience with its skills and thrills is limitless for all.