The ‘Heat’ is ‘On’ as Villa close in on England international 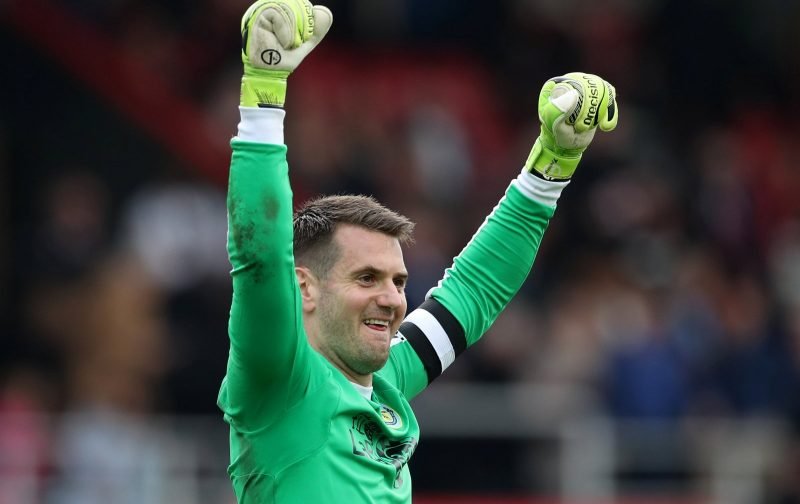 Speculation has been mounting all day that Burnley’s England international goalkeeper is on the verge of completing a move to Aston Villa for a fee in the region of £8-9m. Sky Sports have been reporting that Heaton has been at Bodymoor Heath today undergoing a medical with the club set to announce his arrival in the next 24 hours.

Good business, Villa fans? After all, we already have four keepers on the books – in Jed Steer, Lovré Kalinič, Ørjan Nyland and Matija Sarkič, the latter having already be sent on a season-long loan to Livingston.

At 33, Heaton doesn’t exactly fit the player profile laid down by CEO Christian Purslow of young, ambitious, talented players with good resale value. But goalkeepers mature much later than their outfield counterparts, and their 30s are primetime in terms of performance, with the likes of Manuel Neuer, Iker Casillas and Gigi Buffon getting better and better the older they became.

And what Heaton does bring to the table is Premier League experience and plenty of it, having played close to 100 games for Burnley at the top level. An experienced head behind a newly-compiled defence could be vital in ensuring Villa make a solid start to life back in the Prem and will help the inexperienced Freddie Gilbert and Bjorn Engels settle more quickly into their new surroundings.

Oliver Kay, chief football writer at The Times, feels Villa have done some great business if they secure Heaton:

Most of the fees paid for English players — or any player moving between Premier League clubs — are crazy. For Villa to sign Tom Heaton for £8m would be a steal by comparison. A tough one for Burnley with only a year left on his contract. Bargain of the summer for #AVFC

And most Villa fans seem to agree:

Not gone down well with Burnley fans as this one. Start of the Summer was all for Steer getting his Premier League chance & no doubt over the course of the season he will do but fully understand why Smith is going for an experienced Premier League Goalkeeper. #avfc https://t.co/rPoKTyivPg

Late to the party but the Heaton deal is absolutely fantastic news. Continue to love everything about #avfc right now.

Burnley fans are, on the whole, gutted to see him leave, but most are showing their class in wishing him all the best for the future:

Safe to say Heaton has to be one of the best Burnley players I have seen at the club. #heaton #twitterclarets

Absolutely heartbroken over Tom Heaton leaving. Best goalkeeper we've ever had. A leader on the pitch and the dressing room, someone who has kept us in the league on more occasions than I can count. Selling to a direct rival seems a foolish decision. #twitterclarets #Heaton

Probably the best keeper we’ve had at Burnley in my lifetime he had a handful of blunders last season but was his first spell back after a long injury, leader, organiser good keeper gutted to see him go

So what do we think, Vital Villans? Good business by the club in an important position, or should we have shelled out for Stoke’s Jack Butland instead with a longer-term view?

I’m very much in the happy camp – Heaton has been consistently one of the better keepers in the Premier League in recent years and I never could see the need to spend close to £30m in a position where we didn’t desperately need strengthening. I would have been happy for Kalinič and Steer to battle it out, but if Heaton is indeed confirmed, I’d be equally happy to see him given the nod.