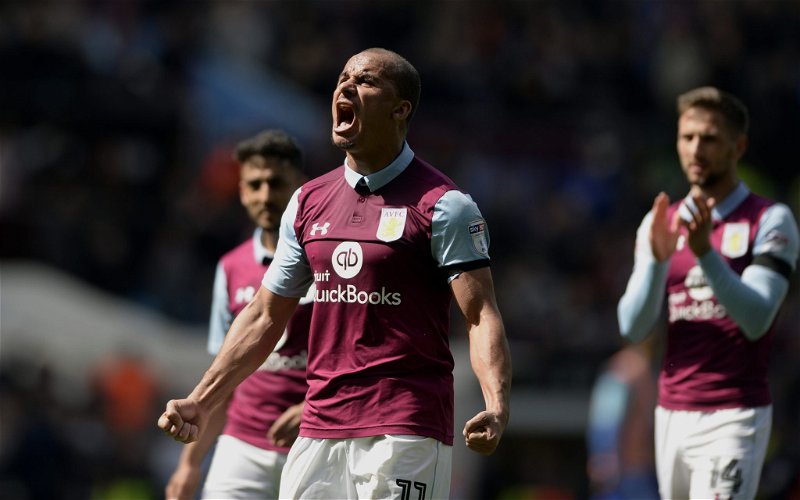 It can come as no surprise to the vast majority of Aston Villa fans that Gabby Agbonlahor will not be offered a new contract.

The striker is out of contract this summer and has found himself fall from potential legend to pretty much a has been.

Several reports, including The Birmingham Mail, confirm that Steve Bruce will not be looking to give Gabby a new deal and so he’ll become a free agent.

It will be interesting if any other club shows an interest in the injury prone player won’t it? Or maybe he will decide to retire and concentrate on his latest venture, a clothing company.

Bruce said: “I had a conversation with him about six weeks ago. I think it’s time for Gabby to move on.” Adding, “I have to say that in the last month or so he’s trained like a beast. I think the time is probably right. The question for Gabby is: what’s he going to do next? He’s probably been institutionalised by the club, he’s been a wonderful servant.”

I think fans have mixed views on whether he has been a ‘wonderful servant’ or not. He has 5 goals in 9 games against the Blues, I think that elevated his status! He is also our top scorer in the Premiership and when he first burst onto the scene, he looked a very quick, exciting prospect. I don’t think we really need to go into the history of his demise do we? The season we went down, I felt a player who is always purported to be a lifelong Villa fan was a massive let down. He wasn’t the only one that season though.

Bruce went on to say that Gabby might still have a role to play. I guess in life you should try to focus on the positives and let go of the negatives. Being charitable, maybe it was his awful injury record that turned him from this bright prospect to … well, the later version?

No surprise Gabby isn't going to be offered a new contract. Started well, injuries blighted times, personally then think he didn't help himself in how he was viewed. But hey ho, remember the good stuff v Blues and forget the rest. Thoughts!? #avfc

And you can see from the answers, the mixed reactions the player gets.

Think that about echoes my view. Tried not to load my post as I wanted all reactions. I dislike those who don’t give 100% or make the most of their chances in life.

Had his moments but never quite fulfilled the promise his early years suggested, I’d be surprised if he got another club from here to be honest, maybe the States?

hates the blues & has a great record v them so status gets elevated. Was integral to O’Neill’s team though, & blew it #avfc

Agreed but definitely no@legend for me

A player who could have been a Villa legend but decided to waste millions of £ of the clubs money to do sod all. Won’t be missed by me.

To be fair other than handful goals he’s never really deserved any contract he’s every got at the club. To think at one point the big club was once looking at signing him

Wasn’t just against the noses no legend I agree but he has done well for Villa.

He’ll probably be our prem all time top scorer for at least half a century realistically, I wouldn’t mind that record! Big moment goals too, but well documented failings.

So there you go, the end of an era. Can’t say I’m particularly bothered to see his wages off the Villa’s balance sheets.