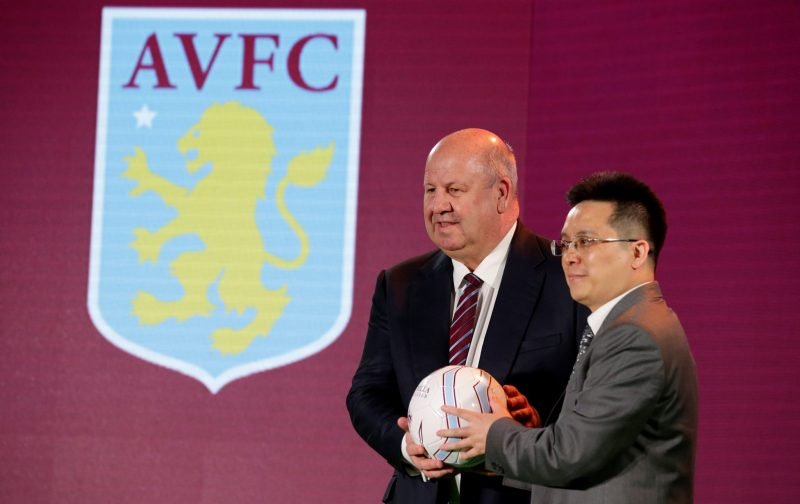 Former Aston Villa CEO Keith Wyness has tweeted out today, in a veiled manner, implying he is one of a few who have been scapegoated due to bad ownership.

I can’t argue, to a certain extent. If the CEO is told there is no more cash coming in, he’d have to dispense his legal duties to advise the owner that he’ll need to attract investment and if not, he’d have to look at voluntary administration options and report back to the owner/board. Tony Xia might not have realised the laws of this land, our CEO will have.

It was clear even at the end of last season at an FCG there wasn’t going to be any pumping in of money from Xia even if we did get up to the Premiership. The simple sums were £140 million from the Premier League for promotion, £40 million was to go on player bonuses and that left just £100 million to spend. Absolutely no extra money from the supposed billionaire. And no, it isn’t all about the ‘new’ rules in China. Xia had assured the CEO that there were enough funds outside of China for them not to impact whatsoever.

It was also Xia penny pinching that left our pitch in such a poor state last season.  It was 11 years (at that time) into a 10-year pitch life.  We won the pitch of the year award and despite the new one being needed and in the process, Xia wouldn’t sanction it.

People are calling Wyness a snake, etc, and yet some still praising Xia. They say ‘well, he brought in these investors’. NO, he did not. He ran us into the ground, he got us massive media attention about our financial difficulties and people looking for a football club then approached because, quite rightly, they would have sensed now was the time to get a massive club for lower than they’d usually expect to pay fee.

You only have to look at what the new owners did. They came, they looked, they did their due diligence, they opened up their wallets and bought us. Randy Lerner did the same, agreed on a price, opened up his chequebook and the money was there. Xia? It was all layered and complicated, with the likes of Samuelson involved, which is the reason I never bought into this guy.

Sad to see the very able julia shelton go at bcfc along with roger and gary, good football people , another example of decent people being used as scapegoats for others failings

Many just want to be told what happened:

Tell us what happened Keith.

Some point out that he’s culpable as well for mistakes made – which is more than fair enough, apart from the cashflow situation. I guess the only thing he might regret not doing, is walking when he found out things were perhaps not all that they seemed.

You were a massive part of our failure.

So you didn’t fail too Keith?! Or didn’t you have anything to do with any decision as CEO..

And some are just funny replies or want him to get it go!

You failed Keith let it go

Whatever’s going on, I don’t think the occasional dig tweets will help your cause or make you feel better. Probably best just to wait pic.twitter.com/W7l5kfqG7g

There are also the abusive ones, you can look at the thread yourself for those if you so wish!

Oh and someone wants Xia taken to the cleaners. I think he’s spot on. The reply to this is true as well though, it wouldn’t be Xia’s money. I would imagine this will get settled out of court by the new owners, they’ll not want this rumbling on.

So there you go folks. Looking forward to the new owners making us a football club again, not a soap opera.