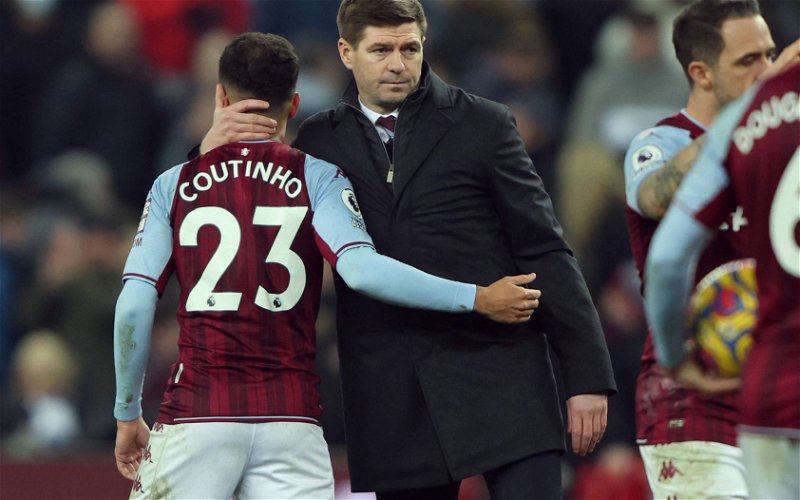 Having fought back from being two goals behind to Manchester United in Saturday’s Premier League clash, it was another game of two halves for Aston Villa fans but there were positives we could take from the second half showing, and one of those was the cameo appearance we got to see from January loan capture Phillipe Coutinho.

Coming on for the final 22 minutes in place of Morgan Sanson, 29-year-old Coutinho’s impact was almost immediate as we stepped up further pressure on the United defence and in the 77th minute it paid off as he was involved in the passage of play that saw Jacob Ramsey claw back the deficit, before then capitalising himself on good work by Emi Buendia and Ramsey (with the assist) in minute 82 to help himself to a debut goal.

He proved to be the more composed spark we were in need of and we clicked very nicely following his introduction, so it bodes well as he steps up his fitness, gets sharper and starts to form a better understanding with the players we know should be absolutely key for us as we move forward under Steven Gerrard.

Whilst Coutinho takes plenty of plaudits, it’s not exactly a shock to see him named in Garth Crooks’ Team of the Week feature for Aunty Beeb as he’d have probably made his squad for simply stepping foot on the pitch – admirably proven by the selection of Ratface Penandes who still seems to be spilling milk over a substitute that never happened.

🗣 "I was asking the referee why they were making a fourth sub when Buendía was injured on his shoulder?"

Bruno Fernandes explains why he was complaining to the fourth official at the final whistle pic.twitter.com/Uh9ERqSUrB

He could have shut him up by pointing out that we didn’t actually make four subs. So it’s utterly irrelevant.

But why let facts get in the way of a self obsessed, entitled blind and dumb rant when you’re used to the officials and VAR covering your back and making you look better than you actually are? That’s just not the Manchester United way is it.

Back to Coutinho and Crooks.

“How good is it to have this lad playing English football again? Coutinho came on for Aston Villa as a second-half substitute against Manchester United and turned the game for the home side. He was involved in Villa’s first goal, although he didn’t provide the final pass, but his bravery and his goalscoring sixth sense was outstanding. With signings like Coutinho, it is clear that Steven Gerrard intends to get Villa in the top four and, with a couple more top-quality signings, I wouldn’t bet against it.”

Get our performances right over 90 minutes, and the next time we face Refchester the officials will need to work overtime to stop us winning. The last few times we’ve played them, we’ve had moments of totally playing them off the park just with no end product. We have to hope that’s what now changes for us and Coutinho could be key to that happening sooner rather than later.