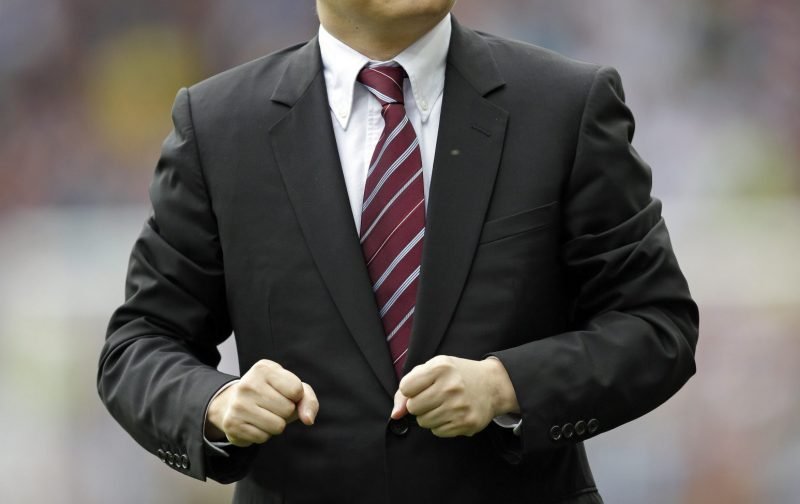 With Aston Villa missing out on promotion to the Premier League as we lost to Fulham at Wembley in the Play-Off Final, the topic of finances isn’t far from many fans’ lips at the moment.

The Astonishing Difference That One Result Means To Aston Villa

Doubt and concern about the future with a reported £40-45million gap to close on our books this year to stay within Financial Fair Play constraints is being addressed by the board.

With the likes of Gabby Agbonlahor and John Terry moving on their wages will free up considerable cash, and reported deals being on the cards for Pierluigi Gollini and Carles Gil that will of course help move us closer to the line but it still leaves plenty of questions unanswered.

A recent statement from Dr Tony Xia can be read in full on the Official Site.

Suffice to say he commiserates with the fans for our defeat and our failure to reach our stated aim this year and he insists he’s as committed as ever to seeing us return to the top-flight but he does concede that although the aim doesn’t change, our direction and approach now has to as we face a third year in the Championship.

“I know that all our management staff, coaches, players and myself need to get back on our feet and prepare to fight again. Like everyone else, I’m delighted to see that under Steve’s management this season, we demonstrated character and unity. We fought like a team. Indeed, the loss is a pity, but we know how much effort and hard work our coaching staff and players put in this season.”

Xia picks out Bruce for particular praise, which should answer any questions about his future I imagine but plenty read it the opposite way, crediting his professionalism during a particularly tough time in his personal life.

“We are all aware that we will face severe FFP challenges next season. I am an Aston Villa fan. But I am also a businessman. Under the current circumstances, I think the club needs to rethink not only the past two years but also the past ten years. Villa needs to be a sustainable football club. This is the ultimate reality that cannot be changed, but I can assure you that everyone behind the scenes is working tirelessly towards achieving our ultimate goal.”

Acknowledging that changes now need to be made, Xia says we should look at it as an opportunity and not a hindrance as with that work done and a line drawn we’ll be in a far stronger position moving forward.

This was the inevitable risk with trying to buy success, some players just didn’t settle or perform, our playing style doesn’t suit the strengths of other signings and we’ve made the mistake of not getting minutes into more youngsters who now will probably take centre stage next campaign.

Whatever happens in 2018/19, let’s not set another sh** or bust target that hypes expectation levels and pressure. Rebuild properly with more of a youth and develop our own focus and the team can grow together, with a style, with an understanding and far fewer hangers-on.

Exactly no point in buying talent when we all ready have it! They just need a few older guys to morph them into a team game not selfish one ????????‍♀️

Do not sell jack. End of. You've got to build a team around him with a different manager. Do NOT sell Grealish!!

I’d say the exact opposite

Doesn’t really give us anything ????????‍♂️ but appreciate the communication

Should be clearer IMO. Doesn't really tell us much and it wont stop the speculation. In fact, i think it will increase it. People will interpret it in all directions. Glad there was a statement, but had hoped for some clarification. #avfc

Box clever we are sound! We all knew FFP was in play this season and next didn’t we? This doesn’t say we are broke far from it just can’t offer big wages and we will sell our fringe players a handful are already leaving so there’s 200k in wages and £8million

Sacking Bruce would be another step backwards. We can’t start from scratch again! They’ll be challenges financially but the support and unity at the club this season has been fantastic and everyone needs to stick together and back the club #UTV

On a positive note, it’s good that the chairman had the stones to come out and make a statement, I bet he would agree that it’s a shame the content wasn’t so worrying. #AVFC #UTV ????

But what more can we do? We all want the same thing and the management at villa park will be doing what they can

Give Bruce the support he deserves. He got us to the play off final. He made shrewd business decisions and dealt with the loss of both parents like a pro. He is the reason we had the most unified team in years.