“Whatever I Could” – New Villa Capture Is Delighted To Be Here, But Why & What’s He Like 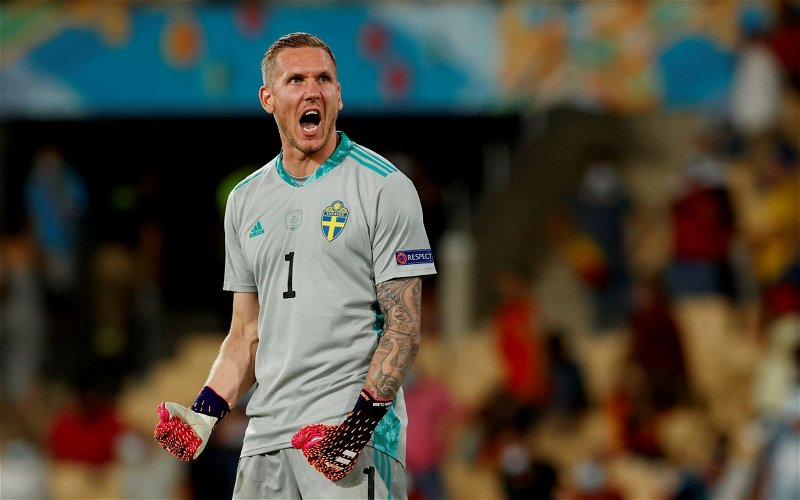 Late yesterday evening (too late for me to do anything else by the time I returned) Aston Villa confirmed the mounting speculation linking us with a ‘cover’ move for Sheffield United loanee, and Roma goalkeeper, Robin Olsen. The player arrived for his medical, and held his first training session with the lads.

Aston Villa is pleased to confirm the signing of Robin Olsen on loan until the end of the season. ✍️

The 32-year-old, 53 cap Swedish international stopper, cancels his season long loan with The Blade, and joins us on similar terms until the end of the 2021/22 Premier League campaign.

He undoubtedly comes in as third choice cover, backing up Emi Martinez and Jed The Stare Steer given ongoing Covid concerns, but he also comes in with great experience. Whilst he’s had a few iffy moments, he has PL knowledge from Sheffield United and a similar loan spell with Everton previously, but he also boasts experience of the Serie A, and the Champions League – having made 242 senior club appearances across his career.

Speaking to the Official Site as he was unveiled, Olsen said making the move once he knew of our interest was a basic no brainer as far as he was concerned – stating it was an ‘easy decision’.

“I’m really, really happy. It’s been a couple of days of waiting to come here, so when I woke up this morning and I knew I was signing for the club I was really happy. It was easy. When I heard about it from my agent for the first time, I decided to do whatever I could to change club and sign for Villa. It was an easy choice from the first call I had from my agent.”

Whilst I expect him to come in as third choice, he sounds desperate to be here and he only has eyes for Emi.

“When you see the building (Bodymoor Heath), you see that it’s a massive club. I’ve heard how good it is, but when you’re inside and see the facilities, it’s amazing. You have everything you need to improve yourself and be as good as you can be. Emi’s a really good goalkeeper and I think working with him will make me a better goalkeeper. The level of the sessions will be high. Hopefully we can push each other to be better.”

It might have been a no brainer for Olsen (although that comment didn’t really endear him to a few fans), for most, given his experience it makes all the sense in the world with ‘some’ clubs playing silly beggers over which games they cancel and how they determine they don’t have the full squad they’d like to play.

This keeps us well covered and could, as previously mentioned, see us get Akos Onodi and Viljami Sinisalo back out on loan spells to boost their development further if Gerrard doesn’t quite feel either is yet really ready for that back up spot.

For anyone who hadn’t actually watched him in action for Sweden, Sheffield United or Everton recently, he’s a damn good shot stopper but as you look around the net more, he is prone to an easy error or two.