Is This Some Sort Of Warped Joke By An Aston Villa Fan? 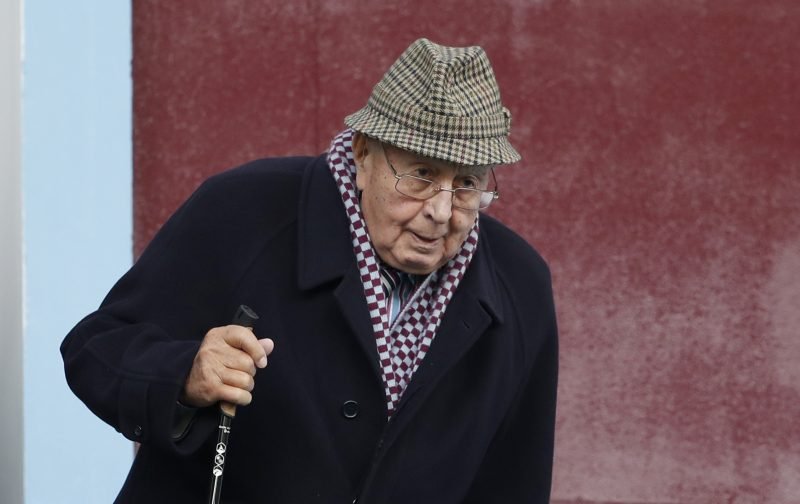 There is a massive re-writing of history going on and the result is some fans want to give Doug Ellis a minutes round of applause.

What on earth are people thinking?  What has followed since his departure, and the often vocal and bitter protests against him, haven’t covered us in glory, I get that.  But that does not make Doug’s time at the club good or acceptable.

The idea has split the fans. Some, I believe, forget just how much he held Aston Villa back.

Will you be participating in the planned minutes applause for Doug Ellis? #avfc #utv

Villa fans: We’ve stopped arguing about Bruce now, we all pretty much want him gone. All on same page.

Do people not remember our relegation just 5 seasons (1986/87) after we’d won the blinking lot? The League, The European Cup, The European Super Cup? Yup, we had won everything, then Doug Ellis came back in and ripped it all apart. He ripped up the great squad we’d had and replaced it with? Relegation fodder.

That takes some doing.

Yes, we became rank under Randy Lerner, but boy did he put some money into the club. Doug? An interest free loan back in the day, that is it. He made a fortune out of the club. There is a huge difference.

Not to mention never putting a penny of his own money into the club but taking plenty out. Allowing the 81/82 squad to be tore apart, never pushing on and allowing managers to strengthen the squad every time we topped the league in the prem. And the missing 500K for Keane!! #avfc

So why are we re-writing history? In all his time, all we won was two League Cups. He massively held us back. Sir Alex Ferguson in his autobiography said he thought we’d be Manchester United’s main competitors in the 90’s, but Doug couldn’t keep up with modern football and instead of staying on, but bringing in fresh blood as well, or allowing the excellent Steve Stride to take the helm, he just hung on. And on. And on.

Do people really think a gentleman like Graham Taylor (may he rest in peace) would have said this for no reason? “I was manager of a club who were run by the chairman/chief executive, Doug Ellis, for Doug Ellis and on behalf of Doug Ellis.”

Doug was there for Doug. He’d tried to get on the board of other clubs, he ended up back with us.

“One of Our Own” is factually incorrect- he’s from the North West, and sat on the boards of Wolves & Birmingham City before he came to Villa

He tried to do the right thing maybe, but mostly for himself.

One of Randy’s biggest mistakes (for me as a former protestor) was being so kind to Doug when incoming, not mentioning the total state the club was in.

People say Doug kept us out of debt. Really? So people don’t remember the David O’Leary era, loan signings and scraping around? I guess people don’t realise overdraft facilities were being withdrawn and the only reason Doug sold was we had no money left.

He made a bomb out of the floatation, most of us lost.

Sold shares at £11 each every supporter that purchased them lost their money while Doug Ellis made £40m yes £40m.

I find this simply baffling.

On Sat 22nd at Villa Park when we play SWFC. A minutes applause for Doug Ellis will be observed. This will take place on the 35th Minute to commemorate the hard work, the commitment and the thanks from us the fans to him. 35 years Service#thanksdoug #WDNC pic.twitter.com/VRKlF3HSeY

You should hear what most of the team of 82 have to say about his return to Villa. They knew what was coming. The 80’s should have been ‘ours’. Thanks to Doug, they weren’t. We had it all, he didn’t like the success we’d had when he wasn’t around and he ruined it.

Tony Morley said it, if the 81-82 team wasn’t dismantled so quickly we could have been up there with the elite now. Sad to see him so frail, but he did more harm than good to AVFC.

If you mean when he bought a dying man's shares on the cheap, it's 36 years ago.

It isn’t even the right month, as Heroes & Villains point out:

And it was in December.

And that is before we look at the ‘stuff’ surrounding stand re-building where he put the Trinity Road vandalisation out to tender, went for the cheap option – where others had quoted to keep the beautiful mosaic – and the company trying to do it on the cheap went bust.

And the Holte End? Well, that was meant to be built in keeping with the tradition, then he demolished the Trinity and built it totally differently.

Thanks for demolishing this beautiful stand Doug pic.twitter.com/bqfg8yGfl0

By the way, at the last AGM I wished Doug a long and happy retirement (in the hope he would retire!) and meant it. He’s done incredibly well to keep going at his great age. That though, does not negate his mark on this club.