“One of the most important moments in the club’s history” 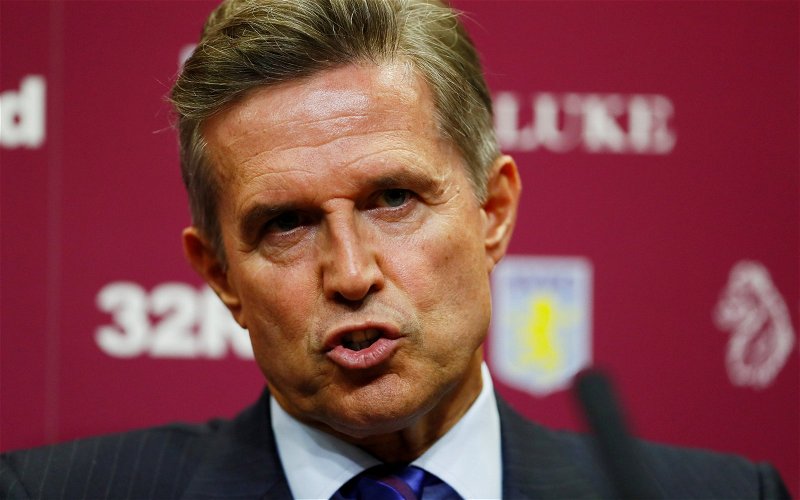 The club have released an interview with Chief Executive Christian Purslow on Villa TV, where he discusses a number of recent developments at the club and although the Carabao Cup semi-final win against Leicester was “tremendous, the priority remains performances in the Premier League.”

Christian Purslow sat down with VillaTV for an in-depth interview in which he updates supporters on a wide range of topics at the club. 🗣️

He declared himself satisfied with the activity in the winter transfer window, considering the fact the club’s hand was somewhat forced by the “freakish” injuries to Tom Heaton and Wesley at Burnley on New Year’s Day, as well as the earlier long-term injury to John McGinn.

“We had a terrible sequence of events at Burnley as you know. A fantastic performance and a great win but a quite freakish outcome with two of our outstanding players, Tom and Wesley, suffering very serious long-term injuries in the same game.

That put us in a situation where we were having to look at replacements in this window. I’m delighted and Suso have been able to go out and get cover in the goalkeeping position, in midfield and for Wesley up top.

We’ve been able to take advantage of the fact those injuries happened before January – imagine if they’d have happened in February! So, very happy with the way things are going and looking forward to the rest of the season.”

Purslow also spoke in glowing terms about the work being done by recently-appointed Academy chief Mark Harrison, who has been brought in to oversee a “complete rebuilding and transformation” of the Academy as part of a long-term strategy to “build a club we can all be proud of” and to ensure the sustainability of the club going forward.

Harrison, it appears, was a major influence on hot prospect Louie Barry’s decision to join us from Barcelona. The young forward was interviewed by Birmingham Live and said, “I came to Aston Villa to work with Mark Harrison. I just wanted to come back. I really enjoyed it at Barcelona. I am coming back home – but I wasn’t homesick. I was born in Aston. I have supported Villa all my life.”

The CEO went on to talk about the “tremendous coup” in appointing the highly decorated former England star Eni Aluko as the Sporting Director of the Aston Villa Women to ensure we have a women’s team of which we can be “proud and which is not an afterthought, a poor relation.”

I am delighted to announce my new role as sporting director of @AVWFCOfficial The clubs commitment, investment & ambition towards building a leading womens program of excellence is exciting and I am proud of this opportunity to lead within the historic Villa family. pic.twitter.com/D3pFTQVU60

He then touched on some of the cosmetic work being done in and around the stadium since promotion and the improvements to some of the hospitality areas in the ground. Purslow expressed great pride in our ability to sell out the stadium week in, week out and mentioned the feedback from visiting clubs on how the impressive stadium, atmosphere and “phenomenal support” made Villa Park such a challenging place to visit.

He also discussed the upgrades at Bodymoor Heath in light of the HS2 implications, and that the facility is “now one of the largest in Europe” and is also now hosting youth and Under-23 matches on a regular basis. The first team HQ is also being upgraded to incorporate a new “Performance Centre” which will help with the physical performance of our “athletes” and is expected to be ready for the coming pre-season this summer.

I think it’s fair to say the risible Jack Woodward is no Andrew Neil in terms of the intensity and rigour of his questioning and Purslow, as a ‘suit’, is not everyone’s cup of tea. The interview is really no more than PR guff by the club following the ‘slamming shut’ of the winter transfer window, perhaps to placate fans worried by the perceived lack of business and improvements to a struggling squad.

Let me leave the final word to our CEO:

“The common denominator is a strategic plan for the very long term that is financed by, and supported by, our owners. I really hope – honestly – that the fans understand when I say to them that… we are backed in all we are doing to try and make this club great again.

Across aspects of what we do, we are so lucky, and I could not be more sure that arrival of Nassef and Wes was one of the most important moments in this club’s history because of everything we are now being able to do.”