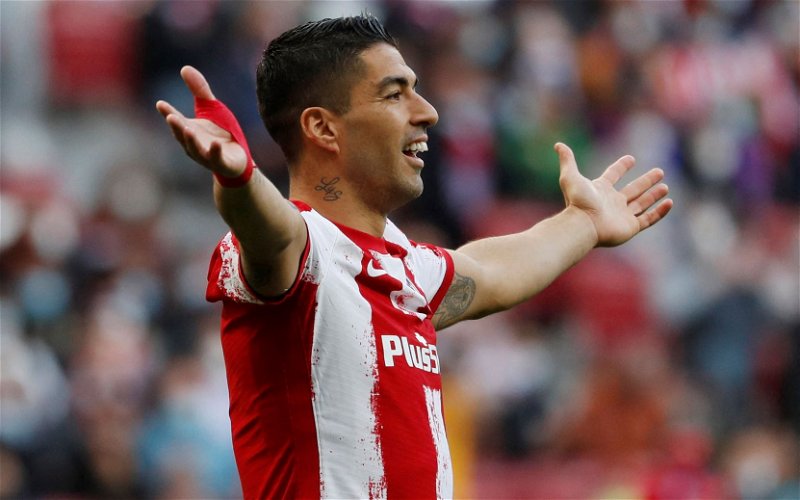 It’s been a bizarre transfer window so far for Aston Villa fans, and the club have slightly tweaked our previous plans for strengthening the squad by bringing in Phillipe Coutinho, Lucas Digne, youngster Kerr Smith and latterly Robin Olsen – but things got very strange last night when unconfirmed reports suggested we were now chasing former Liverpool and current Atletico Madrid attacker Luis Suarez.

The obvious, is Gerard related to George A. joke has no doubt already been made given the player in question.

“Luis Suarez has ruled out offers from Palmeiras, Corinthians and Atlético Mineiro -as well as one from Arabia- to focus on Aston Villa’s offer from his former teammate Gerrard.”

It’s a fascinating prospect as even though Suarez will soon turn 35-year’s-old, we’ve seen how dangerous the likes of others such as Jamie Vardy can be despite advancing years.

Suarez’s career and achievements aren’t up for debate – but his character, behaviour, temperament and the marked difference moving for someone like him could mean to the team spirit we’ve seen in recent years, understandably has some fans worried.

For others, he’s a born winner and even as a short term option it would be a coup, and many don’t think it would be a risk with Gerrard in charge, particularly ‘some’ tricks he could teach Ollie Watkins and Cameron Archer to name just two.

It certainly set our Vital Villa January 2022 Transfer Forum Thread alive given the time of night the speculation seemed to surface.

Tarzan:
Gathering much momentum this one.

Moose66:
Didn’t his dad Cesar play The Joker in the original Batman?

Fulford:
He’ll add some bite to our attack.

Mike Field:
Not sure I like that one. Well, I say not sure – I don’t like this one.

Stephen Jay Hawkins:
He’s 34 now.
I definitely wouldn’t say no. It would be mental.

Sirdennis:
It would be a strange one for me.

Pangloss:
He did score 21 goals in La Liga last season and won the league.

The French Connection:
Yeah, they say he needs a fresh challenge. Something to get his teeth into.

AV Dave:
From Samatta to Suarez lol. What is going on at this club. Who next? Messi?

Whether or not this is speculation 101 following on from Coutinho’s capture remains to be seen, but it’s certainly caused a buzz in spite of the fact I’m yet to see any real and tangible details. The main claim is roughly a straight signing this month, yet others suggest it would only be a pre-contract deal and he’d join over the summer.

You get the feeling this one will run and run, but with contradictory claims, I’m sceptical, but whatever you think of him, he’d lost none of his instinct last season.

Are We Really Signing Suarez?

Do We Party Now Or When It's Announced