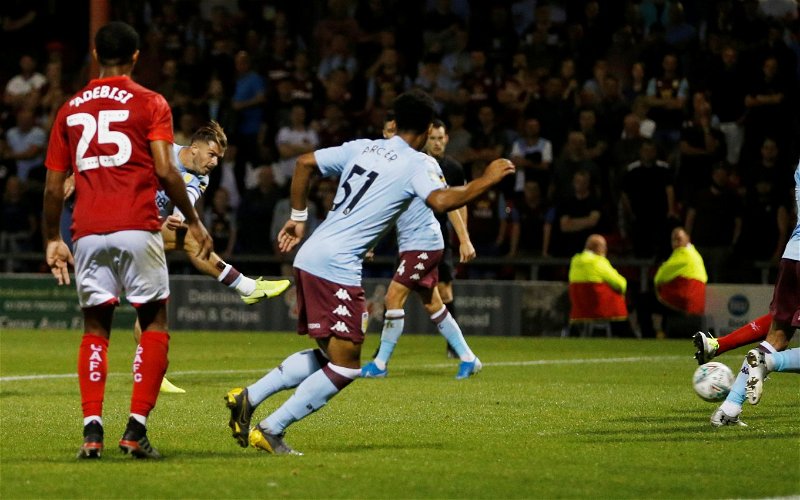 Aston Villa academy graduate Cameron Archer has today made the switch out to local National League side Solihull Moors on a loan spell that will expire in the New Year.

The 18-year-old striker will be a recognisable name to most Villa fans having been on the substitutes bench a few times under head coach Dean Smith – making his senior bow as a late replacement for Keinan Davis in our victory over Crewe Alexandra in the EFL Cup in August 2019.

We are delighted to announce the signing of @AVFCOfficial striker Cameron Archer on loan until 3rd January 2021. 🙌

The half season spell at Moors will be his first experience away from the club and you’d hope he’d get decent game time to bring on his development further, so he’ll be one to watch out for this weekend as they get their own 2020/21 campaign up and underway.

Archer does have a familiar face at the club, as Richard Beale who worked with our Under 18s last season has joined former West Brom gaffer Jimmy Shan as his assistant, so that should help him settle in nicely and Beale will be very familiar with what he can do.

Speaking to their Official Site, Archer said of the move.

“I’m delighted to join the club and be around first team football. There are some familiar faces here. I worked with Richard Beale at under-18 level last season at Villa, so he already knows what I’m about. I’d like to think I’m a quick, sharp striker and I hope the fans see some goals.”

Should be a good spell.

2 Shots, 4 Key Passes & One Of Our Supers Is Back To Their Best For MotM