As a kid in the early 80’s it was the ultimate dream for a boyhood Villa fan to be given the chance of being a ball boy for your birthday and that’s exactly what happened to me but never in my wildest dreams did I imagine that I would get the chance to do it for so long rather than just a one-off. It was my 12th Birthday and it was arranged for me to meet the players before the Villa v Notts County game 28th April 1984. As you can imagine I didn’t sleep for about a month before the big day!

On the morning of the game I was like a kid on Christmas Day only this was much BIGGER than Xmas day in my mind it was the day I was going to be on the pitch at the same time as my heroes in Claret & Blue. The build-up to the game was very different to what it’s like today with no Sky TV and the rest of the razzmatazz, it was what the oldun’s would call the days of proper football.

I was introduced to the players and what an experience that was. The time was ticking by and the moment I had been waiting had finally arrived….ten to three on a Saturday afternoon and the crowd were singing and the atmosphere was electric (albeit we were only playing Notts County). We were told to line up in an orderly manner, four on one side, four on the other and we clapped our heroes onto the pitch. That was just the beginning of an amazing day where I would wait for the ball to go out of play and our aim was to retrieve the ball as fast as possible without annoying the players! I can remember jumping up off our little cushion that we were given and focusing so much on not making a fool of myself in front of thousands of people. It was a truly fantastic day and something that stays with me to this day. 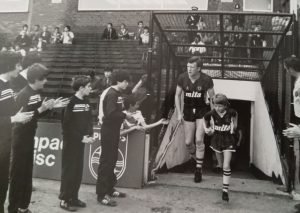 I was fortunate enough to be asked if I’d like to return for the following season and consequently for the next three seasons as well, those were brilliant days and to think of all the players I rubbed shoulders with it is absolutely priceless.

I can remember hearing lot’s of choice words that I wasn’t supposed to hear and especially Phil Thompson one evening at a reserve game in the Central League when he went absolutely mental in the away dressing room with the door wide open, throwing a teapot (the big gold fashioned tea urn) across the changing room. God knows who it was being aimed at but his face was like thunder…..oh the stories I could tell.

Hope you have enjoyed this little trip down memory lane.

If you have an article you want to be published, feel free to email astonvilla@vitalfootball.co.uk