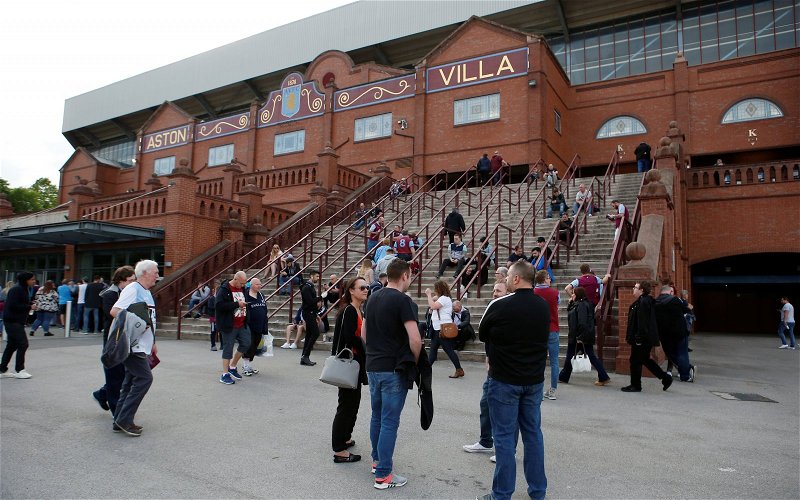 I know footballers often have a reputation for not being the brightest of sparks, and plenty of pundits happily demonstrate that they put their mouth into gear far quicker than their brain when it comes to researching the topic that they are talking about – and sadly this week former Chelsea and Tottenham Hotspur defender, Jason Cundy, admirably proved that when talking about Aston Villa.

Or did he? I think his mistake, was actually a massive compliment in our direction if you’re prepared to think about it.

With the football calendar currently postponed, Talksport presenter Cundy welcomed Mirror writer Darren Lewis onto the show this week and they had quite a bizarre disagreement.

“There are football clubs in this country and a massive club like Aston Villa who must be really, really concerned about their financial situation. It’s not inconceivable to think that Aston Villa could go to the wall in the current climate we live in right now. I’m talking about the people that own and run the football club. They have people who work there, they have administrative staff and people who work on matchdays. Football clubs employ hundreds of people so it’s their livelihoods that could go. I’m not saying that people who live in Birmingham won’t have bigger concerns than football. What I am saying is that football clubs have problems on the horizon, huge problems.”

Now Cundy was challenged on the basis as to whether this sort of topic was currently at the forefront of supporters’ minds, but that in itself misses the point completely (whilst being absolutely right). The issue is, ‘go to the wall’.

Plenty of fans laughed when former striker Darius Vassell seemed blissfully unaware of Nassef Sawiris and Wes Edens wealth when suggesting our only hope of keeping Jack Grealish at the end of the campaign was to attract new owners, and on face value it seems Cundy has been living under the same rock.

Now, not that it overly matters at this point in time, and clubs should be concerned and looking after their staff, not least with the Government protections now in place for employees, but we do have the fourth richest owners in the top flight.

Villa’s finances are fine, our issue has long been Financial Fair Play limitations – outwith Dr Tony Xia’s inability to provide cashflow prior to NSWE arriving at Villa Park. We are in a better position than sadly, all but a few, of the other clubs given the recent developments and where football now finds itself.

FFP has always limited its overreach to ‘matchday’ issues – players, wages, costs, staffing. The Holte Pub has an effect on our finances every day of the week, it’s only matchdays that it falls under FFP regulations and so on.

With football suspended, at least for now, arguably there is no FFP oversight, until we finish the season out and if the year is null and voided, the authorities will have to account for that given clubs’ spending so far, allied to the clear loss of income and I can only imagine it would be a minefield.

But whilst Cundy is right given the wider point about club staff and how owners will now deal with the lull in matchday/television revenue, wages and salaries etc – I think Cundy simply grasped for the biggest club he could think of, having thought of Birmingham to make the example. Even though he opens himself up for plenty of criticism by naming us.

No disrespect meant, as this is a different time and there isn’t much room for usual friendly banter, but had he said Birmingham City, Walsall, West Brom, few wouldn’t have gone ‘yeah, good point’ given relative finances.

So rather than the headlines I imagine you will read on his words, maybe it’s a compliment after all – safe to say Wolves fans won’t be happy though.