Every Aston Villa fan was hopeful that Jack Grealish would make Saturday’s clash with Liverpool at Villa Park but sadly it wasn’t to be – it was, however, a day that almost ended in perfect fashion.

Despite Jurgen Klopp’s side having the far better of the game, Trezeguet’s 21st minute opener looked set to return all three points as a gutsy and committed defensive performance limited the Champions of Europe to only six shots on target, and half of them didn’t actually test goalkeeper Tom Heaton.

With Moss actually being competent in the first half and VAR falling our way (bizarrely) for a change, the visitors got a deserved leveller with three minutes remaining, but Moss appeared to make up for his earlier fairness with a string of dodgy decisions – including five minutes of stoppage time from Narnia – and Sadio Mane (who was arguably lucky to be on the pitch) nicked it for them.

Plenty of positives, but we need to make them count in games we are more expected to win now.

Statistics website Whoscored gave their Man of the Match to John McGinn, but I’d be surprised if most fans didn’t think it was a toss up between Douglas Luiz and Marvelous Nakamba myself. 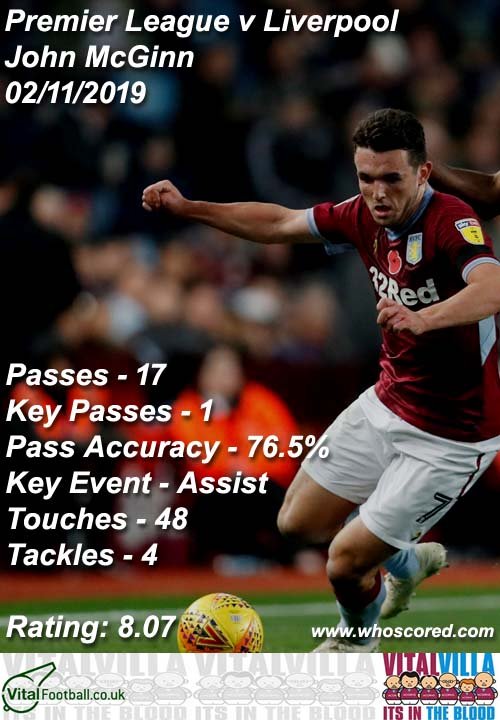 Anyway, McGinn took top spot with 8.07, and the rest of the ratings are incredibly poor given our organisation defensive, but hey ho. Anwar El Ghazi second with 7.20, quickly followed by Fred Guilbert (6.97), Trez (6.92) and Matt Targett (6.88) to complete their top five.

Do the double over Wolves next weekend now.