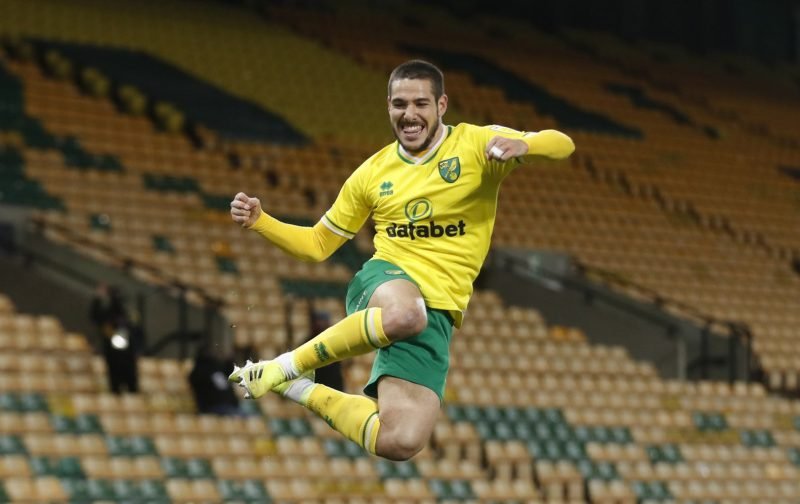 Just to be clear, this is pure fan speculation, not us being itk or saying there are any strong links to this player. However, it does look like a lively debate and the sort of player who could well form a great attacking partnership with Jack Grealish for next season.

Our January Transfer Thread 2021 in 100% Villa is talking about the need for a marquee signing or two, a real statement of intent, to persuade the likes of Jack that we really do mean business.

With reference to statement signing/s. We got promoted, we survived, we’ve consolidated. And so I totally agree, in fact, it looks to me to be now or ‘never’ when it comes to bringing in some in that really screams ‘we are back’ and convince other players already here we aren’t a stepping stone.

Since then though, it has moved on to (or back to really!) talk of Norwich attacking midfielder Emi Buendía, as it seems to be that midfield is the area that needs a fair bit of work this coming summer. Yes, yes, we know they have just been promoted, but is he happy to have another tough season fighting for survival, or will he now want to push on?

He has indicated he could have left in January but showed Norwich City the loyalty to stay and fight to get them up. However, he isn’t ruling out a move this summer.

He said: ‘I could have changed club. But I wanted to bring Norwich back in the Premier League. I don’t know what will happen in the next year.

Villa4Ever said: Look no further than Buendia, before him I would have said Christian Eriksen as he wanted to move back to the Premiership and Inter Milan literally put him on the transfer list as he didn’t get on with their manager, but he’s now taken the Italian League by storm, they’re even calling him Prince over there lol.

We need that sort of player, Jacob Ramsey is one for the future, although he’ll probably be more of a centre midfielder whereas his brother Arron will more likely fit that number 10 role.

McParlandTheGreat added I wouldn’t rule out Buendia. He and Jack could provide a formidable level of creativity in attack, and I like his attitude.

JNB90 agreed: I love the idea of signing Buendia. Maybe Martinez could have a word. The only thing is, would he leave straight away? Considering they’ve just been promoted?

Villa4Ever finished the talk waxing lyrical about the player:

He had his head turned at the start of the season and the manager had to leave him out of games.

I said before the season started we should have got him and that he’s my second favourite player to watch behind Jack, the link below is 3 months old so doesn’t even include the content since, it’s just focused on passing but he does it every single game, no matter where he is on the pitch his vision is second to none in my eyes, that’s without his shooting/dribbling.

He was doing his magic in the Premiership with a poor Norwich team, he outperformed Jack in his very first season in England at 2 years younger, he knows when to pass and when to run at players.

I don’t know if we’re ready to spend £40m on one player, but it’s definitely the next step we need to make.

So there you go, the Vital Villa scouts are hard at work already – wonder if the Villa scouts will have similar thoughts!?

“A Fear Of Being Average.” And The Story Of The Half Naked Man At Bodymoor – Top Interview