Aston Villa fans had another reason for cheer this week, as Welsh international centre-half, James Chester, got the full 90 minutes under his belt for our Under 23 side on Monday as we took a 3-2 victory over Newcastle United.

Villa fans haven’t seen the 30-year-old in action since the end of January 2019, as he last featured in the 2-1 Championship victory over Ipswich Town, before his injury finally caught up with him after he caused lasting damage playing through the pain barrier trying to plug the defensive gaps that former manager Steve Bruce had bizarrely left us with.

Chester had been back in training building himself back up for quite a while now, and he was an unused substitute in our recent EFL Cup clash with Wolverhampton Wanderers, however, the full 90 at U23 level is a real marker for the return of his fitness after his lengthy layoff, and understandably, plenty of fans on social media were delighted to welcome him back.

Decent performance from #avfc against #nufc – lots of chances created, a relatively easy night for Chester and again positive signs from Ramsey and Clarke in particular. https://t.co/gtqIcGBl0D

Great to see Chester getting a full 90 minutes tonight for the U23’s. Looking forward to seeing him back in action for the first team #AVFC pic.twitter.com/6fUlzT9omA

Not sure he will get in anymore tbh, great player though

Fantastic to see Chester well on the road to recovery now, if anyone deserves some Premier League football in Claret & Blue its James Chester. #avfc https://t.co/utq6dUocT2

Are Chester's Days As A Regular Over? 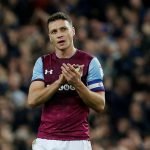 Having significantly strengthened our options at the back, the likelihood of our former skipper getting his starting spot back seems unlikely, as plenty of fans seem to agree, but given his efforts in our shirt simply having him back fit and playing his part in the dressing room is enough for now and given how he battled on through pain, I’m pretty sure we wouldn’t stand in his way if he wanted to move on for greater game time now.

Villa Mugged By Liverpool At The Death – Match Stats