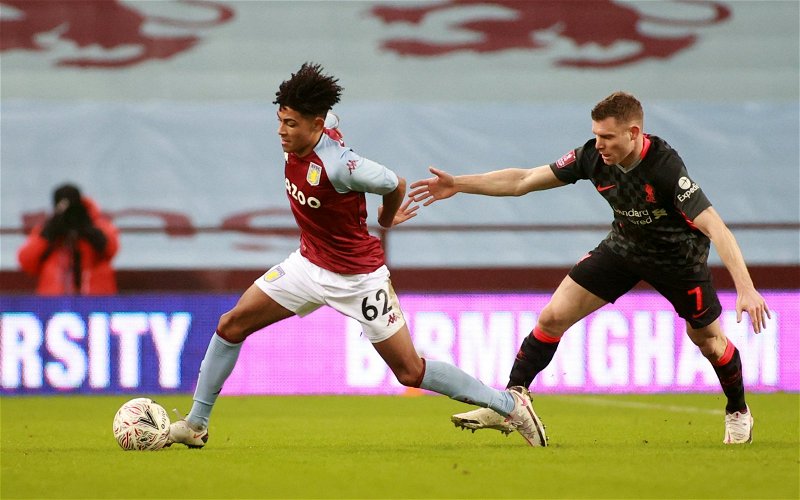 Following on from Aston Villa’s recall of highly rated Academy graduate Kaine Kesler Hayden from League Two side Swindon Town on Sunday, quite a few ‘reported’ outlets have claimed that it was basically the 19-year-old’s fantastic performance against Manchester City in the third round of the FA Cup that tipped head coach Steven Gerrard’s hands and led him to end a season long loan early.

That angle makes for a nice article that implies some kind of unique connection to a source at the club, or Gerrard himself, but anyone with an IQ over zero knows it’s total fabricated nonsense. It’s also a massive insult to Gerrard himself, painting him as somebody who doesn’t do his homework and makes snap decisions on the back of watching one of the many annoying broadcasters we now have in our ‘no longer quite so beautiful game’ who dictate their wishes over the true fans.

I remain pretty confident Gerrard has done his homework and leant heavily on the reports by Adam Henshall and Mile Jedinak (given they are tasked with looking after our loanees) and our recall request would’ve gone in ahead of the Manchester City game on Friday, but undoubtedly we allowed him to stay for that one just to see how he’d do against such quality.

He didn’t do too badly at all, as those of us watching will know, and much as I like him as a player, Kevin De Bruyne is still probably distraught after that fantastic tackle.

With all the praise going Kesler Hayden’s way, Swindon fans have certainly been won over and for those fans who haven’t followed his progress this season, this is what some of them have made of him.

From those marauding runs forward to that goal at Walsall to that tackle against @ManCity, you gave us everything over the last six months.

Thank you for everything, @KaineKeslerHayd, and best of luck for the future – can't wait to see you become a ⭐️in the Premier League#STFC pic.twitter.com/6nMm4nNFif

Gutted ain’t the word.. this hits hard and his abscense will be huge on the squad.. just hope Garner and Chorley have their next man lined up because this is a huge void to fill

Absolutely gutted he is going but its his time to shine, go and give it your best KKH, it will be amazing and dont forget us, its been an absolute pleasure, cant believe though you didnt stay on to have the opportunity go to Mansfield lol 😜

Gutted…… especially after some great recent performances….. that’s the big problem with loans….
Best of luck to the young man…..

💯 gutted you're gone.
💯 Sure you will be a star for Villa.

Kaine, on behalf of every Swindon fan on here, I would personally like to thank you for your time with us.

You have wowed us with your runs, the goal against Walsall and your desire to win.

You will always be welcome back at the CG, come back soon and we will miss you. 🔴⚪️

To Be An Option For Gerrard