Aston Villa took a break from our Premier League campaign earlier this evening and we welcomed Liverpool’s youth team to Villa Park for our EFL Cup quarter final.

Liverpool had nothing to lose (not least on applicable ticket prices) as they prioritised a fixture elsewhere, and although it was the quintessential banana skin for us because of the circumstances, it was also a fantastic opportunity to return to winning ways and book ourselves a place in the semi finals.

It wasn’t the perfect start, but we took our chances when they came and Conor Hourihane opened the scoring 14 minutes in, and we followed it with a credited Boyes own goal three minutes later. By the half time break, Jonathan Kodjia had shown us what he can still do and he helped himself to a brace.

We weren’t exactly busting a gut, but it was professional and we made it count when needed, just as we should do against a side of that experience….but don’t let that stop the media from bemoaning how dare we be cruel to the young Liverpool players, when we all know if the roles were reversed, there would be a love in about how clinical they were.

Oh, and Wesley got on the scoresheet as well.

Kodjia For The Start In The Next One?

Is That Even A Question - Yes 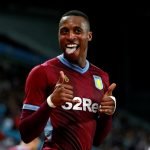