Substitute Comes Up Trumps For Villa To Secure MotM

It was a bit of a mixed weekend for Aston Villa as we welcomed Stoke City to Villa Park for our Championship clash on Saturday.

It wasn’t a poor performance, but it wasn’t the kind of performance we’ve come to expect under head coach Dean Smith and it can be easily described as one of those days. Despite that and conceding twice, we did fight back on both occasions to take a point though, so a clear positive from the match was the spirit that’s growing again in the group and the fact that we didn’t let our heads drop.

With Tammy Abraham first on the scoresheet for us, substitute Jonathan Kodjia had a great impact from the bench as he got our second and despite only a 25 minute runout, he took Whoscored’s Man of the Match with a rating of 7.56. 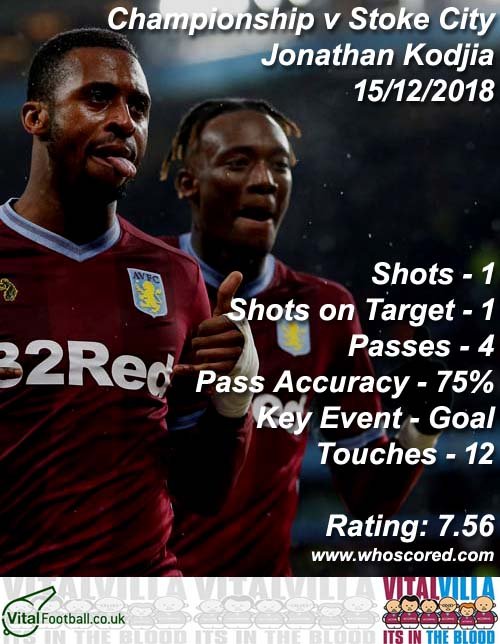 Yannick Bolasie (7.18), Abraham (7.08), Orjan Nyland (7.03) and James Chester (6.75) completed the top five on the day and it’s refreshing to see Nyland up there given the valid criticisms that have gone his way so far this year.